Share All sharing options for: The evolutionary Nick Anderson

Any chance I get to reference Darwin (or even "social darwinism") - I'm all for it. Even better - the Darwin Awards. 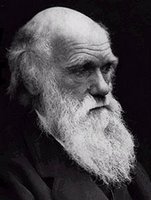 Wait, I'm getting ahead of myself.

"That's what our system is all about, making the game easier, not settling for jumpers"

T-Mac is a skilled perimeter player. He also used to be a very, very feared player when he put the ball on the floor and drove it to the freakin' basket! Ask Shawn Bradley...

somehow, some time, some way - T-Mac has stopped being aggressive. He constantly settles for that fadeaway, off-balance, line-drive 18 foot jump shot. Sure, it goes in about 40% of the time. But, like LeBron James circa 2005, all that does is make things easy on the opposing defense. T-Mac bails them out every time. Jump shooters don't get to shoot free throws - and I think that's both the problem and the solution for Tracy.

All that talk about not settling for jumpers... and what does Tracy do? Settle for jumpers.

Lee and I watched Game 7 v. Utah last year in horror as T-Mac continued to puss out and not take the ball strong to the rim. In contrast, Rafer sucks, but he at least tries to draw contact/fouls with that awkward looking flip shot of his.

Is Tracy McGrady afraid to get fouled?

In 1994/1995 - Nick Anderson was one of the most feared perimeter players in the NBA. He got to feed off Penny and the Fat Ass... he was a dead-eye shooter... and he was very good at finishing strong at the basket. Then came the 1995 NBA Finals. Game 1. And four missed free throws.

Granted, Nick's inability to make a free throw made me happy that day -- it brought Hakeem and Horry another ring, of course. But is history repeating itself with T-Mac? Karma would be cruel that way.

McGrady on a bad day is a far superior player to Nick Anderson on his best day. This is what helps hide any growing concern that T-Mac is becoming a pure perimeter player. He can get away with just taking those mid-range shots because he's so good at it. But he's 10x better if there is the threat that he might go dunk on your head. Which he just doesn't do anymore.

I miss the old version of T-Mac. Come back!!

moral of the story/rant/plea for help: stop settling for jumpers, Tracy!!!