Yes. You read the title right.

Hakeem Olajuwon is tragically underrated as one of top centers in NBA history.

From his wikipedia page: "Olajuwon is generally considered one of the five greatest centers to ever play the game, along with Bill Russell, Wilt Chamberlain, Kareem Abdul-Jabbar, and Shaquille O'Neal." Sure, okay, maybe I shouldn't get so riled up at being put in this category. 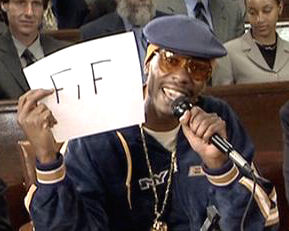 To put it mildly - that is absolute bullshit.

There is no f'n way Hakeem should ever be ranked below Shaquille O'Neal on any list. Except maybe "most cheeseburgers consumed during an NBA career." The one time Shaq faced Hakeem in a playoff series during Hakeem's prime - the Dream crushed that mofo. Swept his team right outta the NBA Finals. 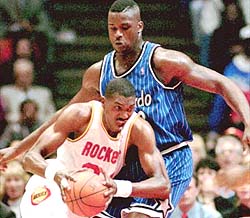 1. Wilt Chamberlain - he's a freak, but he did rely on others to get him his ring.
2. Kareem Abdul-Jabbar - Sports Guy says he is a ninny, I don't disagree. But he's good.
3. HAKEEM
4. Bill Russell - though he's overrated on many levels
5. The Fat Ass - (and the fact that the Fat Ass isn't #1 overall is a shameful reflection of Shaq's wasted talent. Too many movies and CDs... not enough time being a leader. Kobe was right - Shaq spent too much time showing up out of shape.)

***note the complete lack of players from Utah, or anyone named "Patrick Ewing"

That said here's some arguments for why Hakeem is/was better than all of them:

Wilt won two championships - in 1967 and in 1972. Wilt's 1967 Sixers team was very good - but it featured TWO other future Hall-of-Famers (Hal Greer and Billy Cunningham). A starting lineup with three HOFers... in the 1960s. When there were like 10 teams. Wilt averaged 24.2 rebounds per game that season. That's video-game shit there. But he'd never duplicate those numbers in the 1990s version of the NBA. No way.

Wilt won another championship with the 1972 Lakers. A team that was so loaded that Chamberlain wasn't even the featured scorer or star player on the team (that would be Jerry West). Wilt didn't even make 1st-team all NBA that year.

Imagine Hakeem Olajuwon with Jerry West, Gail Goodrich and cameos from Elgin Baylor and Pat Riley?? That would be sick!!

Of course, Hakeem can't compete with Wilt off the court... 20,000 women? A record soon to be broken by Paris Hilton, but impressive nonetheless.

Kareem is the all-time leading scorer in NBA history. He also has 6 NBA Titles (one less than Robert Horry - suck on that Kareem). Only one of those titles came without the help of one Earvin "Magic" Johnson. This cannot be overlooked. Magic is probably a top 5 NBA player of all time - and the #1 PG of all time. Kareem survived longer than he should have because Magic was that damn good. Five titles because he got to stand around and watch Magic, James Worthy, Michael Cooper and Mychael Thompson run wild. Oh, and Byron Scott - he wasn't as shitty a player as he is a coach.

Plus, no one ever really feared Kareem once he left UCLA. Sure, he was a HOFer without a doubt, but even Shaq scared people. Kareem kinda pranced his way around the court. Even his go-to move was kind of lame for a dude that is 7'2". A sky-hook? Really? That afraid some guard is going to block your stuff? Whatever...

Okay, 6 rings is hard to overlook. And all the points. And everytime someone mentions Hakeem's blocks record they always talk about how the stat wasn't kept in Wilt and Kareem's day... to that I say, whatever. And the scoring record? Kareem played 1,560 games in the NBA. Look it up. If you play that many games are are *not* one of the top scorers of all-time, you must have a lot of dirt on Pat Riley. That's all I'm saying. Shit, when Karl Malone is the #2 leading scorer of all time - that kinda negates the argument that it is an important record.

Bill Russell has 11 rings. Yes, I know. This keeps getting shoved down my throat every time his name is mentioned. Here's the thing though: if he did NOT have 11 rings, his career would have to be deemed a failure. During the vast majority of Russell's career, there were EIGHT (*8*) teams in the NBA. He had a 12.5% chance of getting a ring every single year. Plus, the dude had, on average, 5 hall of famers on his roster at any given time (Russell, Bob Cousy, John Havlicek, KC Jones, Tommy Heinsohn, etc., etc.).

Seriously? You have 5 HOFers on the roster at the same time? You are not allowed to lose with that kind of talent. To make a more direct analogy - if the Celtics of that era ever lost a game - it would be like the Duke Blue Devils beating the San Antonio Spurs. There is no excuse for having any *less* than 11 rings.

Oh, and your career scoring average, Bill? 15.1 ppg. In an era when teams routinely scored in the 120s. Shit, even Patrick Ewing laughs about that low number. Check that... Xavier McDaniel laughs at that number. And while the X Man rules, he is not in the HOF.

Uh, yeah, Shaq. He who could not win in 1995 with Penny Hardaway at his finest. He who had to have Kobe carry his fouled out ass to the ring in 2000 (Pacers), save his ass against the Spurs in 2001, and had Horry save his ass against the Kings in 2002. Sure, Shaq got to beat up on New Jersey in the Finals because the East had no centers. Whatever. Shaq has never been able to do anything without the help of a stud 2 guard. Witness this season without D-Wade. Or Shaq's rookie year pre-Penny. That Fat Ass is a lot of hype, a lot of mouth, a good sound byte or 20, but the substance just isn't there. And he's never going to approach Hakeem's 3,800 blocked shots.

I'm not even sure Shaq has jumped off the ground 3,800 times. Takes too much effort. Even Cartman learned how to use his powerful ass in productive ways: 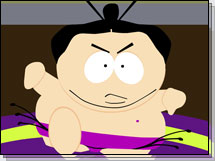 12 time all-star
Only player to be NBA MVP, NBA Defensive Player of the Year, and NBA Finals MVP - in the same season. Suck on that, Jordan.

The only HOFer to play with Hakeem during his prime? Clyde - and we got Clyde on the downside -- for Otis freakin' Thorpe. And until my attempts to get Robert Horry inducted are successful, that's it.

(The Barkley era is struck from my memory. I can't believe we traded Horry, E.T., Chucky Brown and Mark Bryant for a broken down Barkley. I'm still crying about this. 10 years later.)

For anyone daring to claim that I need to discuss David Robinson? No. Fucking. Way.
I direct you to this. Case closed: