Share All sharing options for: on the path to .500?

If at any point I see the Rockets leading 88-82 in the 4th quarter, I'm going to have flashbacks to 2004 - and I might never recover. Then again, I can always pray for this to happen again: 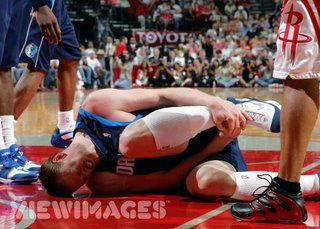 Or is it bad form to pray for injuries? Does it count if you ask for an opposing player to get hurt? I think I need a judge's ruling here. And since I've been praying (unsuccessfully) for Emmitt Smith to get hurt since the early 1990s - can I carry over those prayers to the other Dallas team?? There's gotta be a loophole allowing for this, right?

Check that. I already have bad enough karma. And I don't rock the cool 'stache like Earl Hickey. So let's just move along...

The Rockets started 6-1. They have now regressed to 6-5. With Dallas coming into town. Dallas gave us our first loss. Or rather, Jason Terry did. It's time to exact a modest level of revenge. Or at least preserve some form of regular season dignity.

(or would the Chinese government not allow this?)