People That Piss Me Off (Week the Second)

Share All sharing options for: People That Piss Me Off (Week the Second)

Yes, I know it's more than a full week after my first PTPMO entry... there were holidays in the way. And it was hard for me, alright? So back off!! 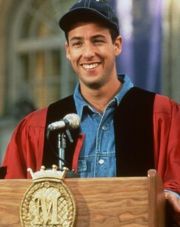 Anyway - without any interruption, the five people/teams/entities that piss me off this week (not necessarily NBA-related, but...)

This has been covered by Big Daddy Drew in his weekly deadspin post, but a big F-U to the higher-ups at the NFL. First, I hate the Cowboys. I also have a relatively strong dislike for the Packers and the random fellating of one Brett Favre (pronounce your name right, you redneck SOB!). But I have a distinct predilection for watching regular season NFL games between two 10-1 teams. It only happens once every 15-20 years, so I kinda had to watch. What can I say, I like football. I like good football games even more.

Nevertheless, even though I have the NFL Network at home, watching these games alone is lame. So, the problem is that this forced me to (a) go to a bar with 200 other people, and (b) Miss the Rockets v. Golden State matchup because the bar would not switch the channel. Damn Cowboys fans.

And now I'm all tired and irritable because I had to wait in line for all my beer... got no sleep... and only recently found out the Rockets gave one away to the Warriors. Weak.

The NFL knows it has this power over me, and makes no effort to be nice to me. F-U, NFL.

Yes, Towelie had not one, but TWO borderline good games this week. (Granted they are mediocre games for most players, but we're always grading on a curve when we talk about Alston.) Because of this - it makes it harder for me to write "Rafer Alston sucks" and have recent empirical evidence to support my contention.

So, please Rafer, just continue sucking so the Rockets will be forced to dump your sorry ass.

On days when all I wanna do is write a scatching review/commentary about the NBA or a particular player to this here blog, opposing counsel comes along and [discussion redacted due to privilege, confidentiality and a desire not to get my ass fired/dis-barred]!

Look, I know you're all Canadian and anti-war and shit, Nash. So what's the deal with kicking Yao Ming in the 4th Q on Wednesday night? First you jump out in front of him in an attempt to draw a foul, flop when Yao tries to avoid contact, and when Yao actually falls down you kick him!?!? WTF? The dude is 7'5" - he doesn't exactly pop right back up when he falls down.

Don't make me go get Robert Horry to hip-check your ass into the boards again!

5. Houston Rockets who can't shoot at least 80% from the FT line.

Basically, this points the finger at every Rocket not named "Yao Ming". Guys, it's a freakin' free throw. No one is defending you. And you are supposed to be professionals. Hell, I am a 6'1" skinny white dude. But I made 85-90% of my free throws all through high school and college intramurals. So, yes, I do believe this gives me a license to be angry at you guys for continually failing at a fundamental part of basketball. Maybe you just need help?