A Petition to Remove Rafer

Share All sharing options for: A Petition to Remove Rafer

On October 4, 2005, the Houston Rockets made a rare personnel mistake. They traded Mike James - a key player on a playoff team - to Toronto for one Rafer Alston. This man:

In the interim 2+ years, Mr. Alston has proceeded to amass the following statistics: 12.1 ppg/6.7 apg in '05/'06 and 13.3 ppg/5.4 apg in '06/'07. Of course this does not take into account his badly timed turnovers in the 4th quarter; his continual regression into his "Skip to My Lou" street-ball persona/alter ego when a simple chest pass would suffice; his stunning inability to pass the ball to a man 7'5" who happens to be standing five feet away; a shooting form that is the basketball equivalent of Jeff Bagwell's batting stance. 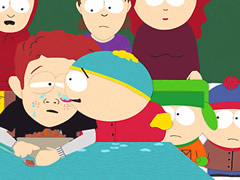 I can't recruit him to dispose of Mr. Alston for me/us/Houston. That means someone else has to take up the cause. The cause being:


Never before have I despised a Houston-area athlete so much. But I cannot bear his sucktitude any longer. Rafer Alston cannot remain a Houston Rocket if the goal is to win a championship. Or a playoff series (Playoffs?!?!?).


Therefore, I must submit the following to Daryl Morey:


No, wait, that's not permanent enough...

Considering that Rafer's amazing inability to play fundamental basketball was the impetus for this here blog - it's only appropriate that the initial post be a public plea for his removal from the Rocket roster. Tossing him in jail for his multiple offseason arrests would be one means for it - but cutting his useless @$$ is probably better for Yao and Tracy.


Please, Rockets Management, I beg of you... I'll eagerly await your response.