Robert Horry for the HOF (plea #1)

Share All sharing options for: Robert Horry for the HOF (plea #1)

On June 24, 1992, the NBA held its annual Draft. It will likely follow the 1984 and 1996 drafts as the most talent-stocked draft of all-time. After the Fat Ass was taken by Orlando first overall (no surprise)... the draft began to get interesting around the 8th pick. Once the Bucks took Todd Day (ha ha!), many Rockets fans started to sense that Harold Miner, aka Baby Jordan, would be tossing post passes to Hakeem Olajuwon for years.

At picks 9 and 10, Clarence Weatherspoon and Adam Keefe were taken. Okay, seriously... 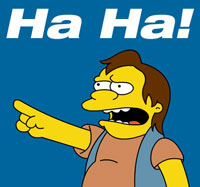 This put the Rockets on the clock with the 11th pick - the first time they'd drafted in the lottery since Hakeem was taken first overall, instead of that overrated "original" Jordan guy. It was now a near certainty that Baby Jordan was coming here. Then they called the name "Robert Whore-y" (phonetically - thanks, David Stern!). Immediate reaction by 99.9% of Rockets fans:

Now, Horry's reception by Houston was not the kindest. But for me, everything changed on March 16, 1993. For this game was monumental on two levels. First, it was the Fat Ass' first visit to Houston in his rookie season. Shaq was popular in those days. Even with me, I'll admit. But the Rockets had a 13 game winning streak going. The Magic took an early lead... only to see the Rockets fight back (heart of a future champion, bitches). With the Rockets down 93-91 with a few seconds to go, Big Shot Rob was born. Horry hit a game-winning 3 to beat Shaq and continue a winning streak. The winning has not stopped since. And with me in the audience - and sitting right behind the basket where Horry nailed the shot... well... I've been a loyal and devoted fan ever since.

Sadly, the Internet wasn't what it was today back in 1993, or else I'd post a YouTube link to this shot.

Of course, Horry would continue to haunt Shaq for a while... witness the 1995 NBA Finals:


Horry won 2 championships with the Rockets ('94 and '95)... and the rest is mostly well-known history. In 1994 he led off Game 7 with a Gorilla Dunk over Patrick Ewing. In 1995, he finished Game 3 of the NBA Finals with a game-sealing 3. He also still holds the record for most steal in an NBA Finals game (7 for those counting at home). All he's ever done is come up big when it matters. Unlike these guys: 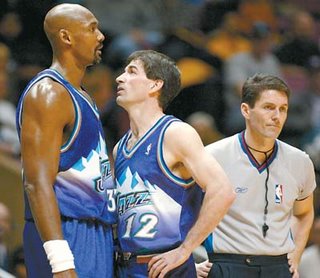 Horry now has 7 rings (Karl Malone, Charles Barkley, Kevin Garnett, LeBron James... 0). Jordan only had 6. [see, I told you he was overrated]