Square Pegs and Round Holes

Share All sharing options for: Square Pegs and Round Holes

Lately grungedave and I have been talking about doing the all too cliched :"If the Rockets were South Park characters" post. It seems easy to do, is harmless and could be fun. The only problem? It's not easy, it's hard, half of this team has absolutely no personality on or off the court. So far we have only agreed on one thing, and I can't imagine that any one would argue it: 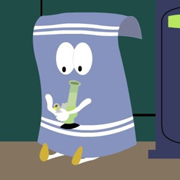 I mean really, he's the worst player in the NBA that's starting and Towelie is the worst character in cartoon history on a good show. They both are repeatedly trotted out even though everyone can admit they are the worst elements of their teams. At least on South Park they don't pretend that Towelie is good, they know he's awful, even he can admit he's the worst character ever. That's the first step, admit when you're wrong. Or at least I think that's step 1 of the twelve step program.

I just ran by the Toyota Center to pick up some tickets to an upcoming game and went into the team store. Apparently I wasn't supposed to be in there as the lights were out and there were a few players as well as Coach Adelman in there. If I had balls I would have told him that he should give up the charade. I did tell him about the blog though, so on the off chance he reads it (and yes, I know he's not going to, fuck you): Hey coach, I know I told you to beat the Mavs tonight, and I still hope that's true. What I didn't say was, Fuck Rafer Alston. That's actually the other part to what I was trying to get out. Sit him down, start Mike James, play Stevie as the backup. I know I joked with you and your wife that she should get a Steve Francis jersey as a joke, but I was only half joking, the other half was meant as a hint. I don't care how out of shape Stevie is and how in shape Rafer is, Stevie is a better player and it would play out on the court if you let it.