Why I hate the Utah Jazz

Share All sharing options for: Why I hate the Utah Jazz

In honor of our Deadspin and TheBigLead stardom, okay so it's more like the size of the star on a T-shirt versus the sun, but still thanks for the mention guys. The ironic fact is that it was in a mention with a Utah Jazz blog. I think it's time to seethe with a little hate for that team (not the blog, looks like good stuff).


I fucking hate the Jazz, I hate them in just about every way. Let's go down the list, from what I hate the least. And while one had to be the least, I still hate it with utter and absolute passion, just with about a razors worth less ire than the next item on the list.


10. Let's start it off with Salt Lake City. What in the freakity frick is a Salt Lake? Fake ocean, that's what it is. In our metro area we actually have a REAL ocean, none of that fake shit. They have 178,858 people in that city, they even suck at having people, you know how many we have? 2,144,491, suck on that Utah!


9. They stole our mascot and then made it cooler, that is a load of crap, you can't go stealing/improving things and get away with it. Just for that, I'm linking to the worst picture they have. See Clutch kicks the shit out of their bear 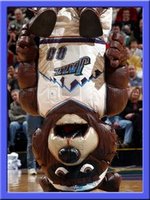 8. Energy Solutions Center, I work for an energy company, that's not it, I hate Energy Solutions center. Plus, it used to be called the Delta Center, and I'm from Houston and Texas where Continental and Southwest make Delta their bitch every day. And no, I don't have any idea if it was named after the airline, and I don't care.

7. They left the same the division as the Rockets, why do I hate them for that? Because I enjoyed beating them routinely during the year and now we only get to play them 3 times, and we have to go to Utah this year for 2 of those. Utah, what on earth is their to do in Utah? Rafer can't even knock any of the girls up because when you go out in Salt Lake City the only thing to do is go to church with Bill Henrickson and then be pissed off that Ginnifer Goodwin is taken 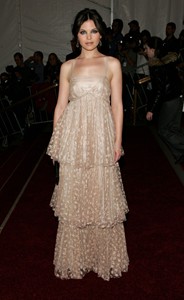 6. Navy Blue, Ice Blue and Purple - What....the....fuck.... Who on earth thought this was a good color combination? We're going to put sailors, dirty ice and Prince together and it's going to look so handsome!


5. Deron and the Guy who stabs blind guys in the front - Last years playoffs is enough for me to hate them. I actually only have mild distate for Deron, but I cannot stand Boozer, that mother fucker preens like my one year old running around after a bath. For some reason he thinks that he's dominating Yao, even though he doesn't have to guard him on the other end. Man up bitch, Yao detroys you everytime you come near him on the defensive end.


4. Championships, oh wait, I actually like them for those :-) I hate them because of the playoffs in general where they somehow own the all time series 4-3 even after the Rockets started with a 3-1 lead. Last year really amped it up for me, I sometimes yell at TMac to drive to the basket and not shoot a jumper during The Office and Family Guy. How many championships did you get out of those series wins though Utah, oh, wait,I can't hear you with these Larry O'brien trophies in my ears. 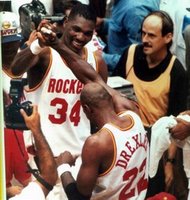 3. Jerry Sloan, I should probably have old man river number one on this list because he's the tie that binds. The grumpy old fart only seems to know how to yell at people, I wonder if when his wife brings home 2% milk instead of vitamin D if she has to sit on the couch and get a lecture so she "learns" 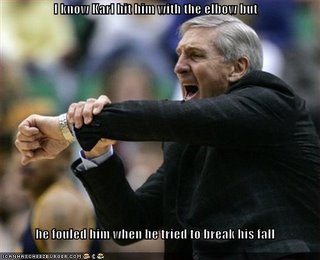 2. Karl Malone, Lee couldn't hate you more Karl, and yet you are still only number two on Lee's list. Karla, your incessant whining after you bowled someone over on a "pick and roll" and didn't get a foul called your way makes Lee realize you earned that nickname. And I put pick and roll in quotes because that pick was really Malone running into someone and as that person fell over from the non-called offensive foul continuing to run and then scoring on a hideous shot. It sickens me deep in my bowels how many moving picks he got away with. And Yao has stopped moving, so I don't even want to hear that. 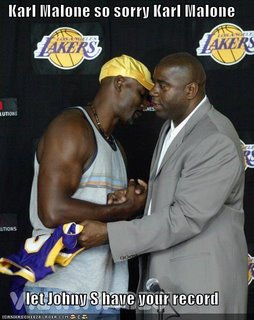 1. John Stockton, oh Johnny boy, you served as the impetus for my hate. I wish I could Scott Tenorman you three times a week and then have you drawn and quartered for three days and then double up on Sunday. I can't even get away from you in March Madness because everytime Gonzaga gets mentioned I have to hear about how you went there. You aren't in the top 400 NCAA players of all time yet your name gets mentioned what seems like every 8 seconds in the tourney. There is no way on earth that shorty shorts should own the all time assists record. If a quarter of those moving picks were called you wouldn't be in the top 10. 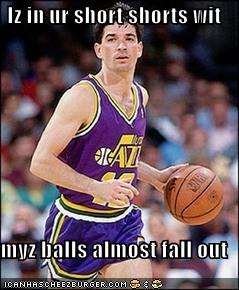