Yao is not subtle

Share All sharing options for: Yao is not subtle

We are 8-7, they are 11-3. A win will do a lot of good for both the standings and the Rockets' collective ego. Even Yao is taking this one seriously. From the Houston Chronicle article today:

---
Tonight's game in Phoenix should be the best test of that. In the loss to the Suns, Yao was rarely in good scoring position and McGrady was out with his sprained elbow.

"At least we're moving the ball better," Yao said of wins over the Nuggets and Clippers in their last two games. "I know who I should pass to, but I think we still need to work on that. When they come to double-team me, it's still not perfect."
---

Hold up, that was almost subtle there, Yao. "I know who I should pass to...." I guess that also means Yao knows who he should not pass to. This guy: 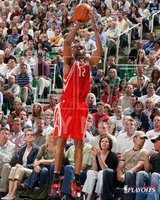 Look at that - Rafer wide open. I expect to see that, oh, every game. Jeez, even Uncle Rico's throwing motion is more fundamentally sound than Rafer's jumpshot.

I'm even more worried now that Rafer actually had a decent-to-good game on Monday. He scored double figures, shot 50% and the Rockets won. Yup, that's a definite "oh, shit, he thinks he's good now" moment just waiting to happen. And now we expect to play an up-tempo game with lots of jump shots and running-and-gunning? Uh oh.

I think Tracy McGrady expects it too, and he's trying to stop it:

"The one thing you have to do in this league is stay the course. Whatever your game plan is, whatever your offense is, you have to stay the course and keep on executing. That's what our system is all about, making the game easier, not settling for jumpers, and being able to put myself and Yao in easy scoring positions."

translation: Hey, Rafer, stop shooting. Give me or Yao the ball and get out of the way. Maybe try to play a little defense on that dude with the beady little eyes and flapping head.

... at least that's what I think "staying the course" should be.

My prediction for the night? Rockets 112, Suns 109 - T-Mac with a surprisingly clutch layup and the following FT to put the game away. Rafer likely does his best to keep the Suns in the game with a 3-13 (1-7 on 3s) effort...

I'm still holding out hope for Yao and T-Mac to give him the Private Pyle treatment in the locker room: