I completely agree Tracy, it was nice. Bonzi and Scola were fantastic last night as was everyone else that played more than 3 minutes. Hell, even Rafer almost had a triple double. Of course he also shot three balls that didn’t hit the rim at all, but he still did two things decently, suck and pass the ball.

When we first got to the game we were handed Rockets Power Dancers calendars, and I have to say, they are pretty nice. I’m married and have a kid, so mine will never get put up anywhere, but it was still a nice gesture by the Rockets. It even helped me further prove that July sucks, it had a girl with my ex-wife’s name on it, it’s a long time exes birthday month and it especially sucks for July 24th, Rafer’s birthday. They really try to make the games a fun atmosphere, more than the Astros and MUCH more than the Texans. The only problem we had all night is that they decided that every dog has their day and put Rafer on the cover of the game guide. 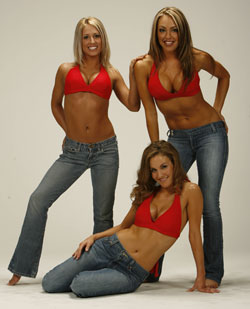 The intros were hilarious with everyone looking up at the camera and trying to look hard. Shane Battier trying to be intimidating was a little like someone being scared by a bunny, utterly ridiculous. Is there a whiter man on the planet than Shane Battier?

The Rockets were 3/14 at the first timeout of the game, and unsurprisingly the Grizzlies were up 12-6. I think the Rockets were still on the hangover of Rafer inexplicably getting on the program guide, but maybe it was just that they came out playing like they have in the last few losses they had, completely selfishly.

Shortly after the timeout the Rockets went on a run. One thing was apparent early and often in the game: Rafer’s teammates do not trust him, especially on the fast break. Tracy and Rafer had a two on two fast break and Rafer was wide open completely unguarded and Tracy refused to pass him the ball. Instead he slowed it down just a bit and let Luis Scola catch up. How does it feel to be stranger to TMac’s child Rafer? You couldn’t be more untrusted if you slept with his wife.

Yao was in the game with 1:05 left in the first and he needed a breather. Why was he in the game? He was going to rest, why risk the foul? And of course, he picked one up with 4.2 seconds left on the clock and it proved the point. I know Ricky is experimenting, but that’s just silly.

Bonzi remembered how to play, but he still can’t jump right now. He got more athletic with his moves as the game moved on and really trusted his offensive moves. He looked like the Bonzi from his Sacramento days. I was pleased, and really, let’s be honest, that’s what’s important.

After the timeout the Rockets outscored the Grizzlies by 19 and were up 55-42 at half.
12 points for Scola and 16 for Bonzi, that’s what I’m talking about!

The low risk, high reward halftime show was by the Society of Karate. The only appropriate response? KICK ASS!! But alas no one got put in a body bag, swept the leg OR did a flippin awesome crane kick. Let’s just say I was more than disappointed. They could have made someone bleed for my pleasure at least! 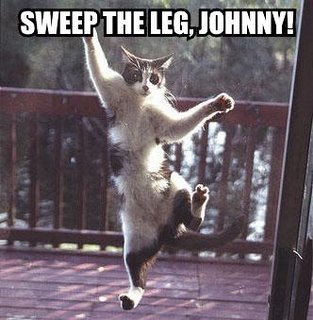 After halftime Yao came back to kick some ass. He had four reposts on the night that were phenomenal. And because only one had Rafer throwing the entry pass he was able to convert on all of them. Towelie threw the ball to him at his junk, no idea why he doesn’t realize the guy is 7’6. It didn’t matter though because Yao is awesome.

I don’t care what Dave says, Battier = Shoota, choke on that baby!!! 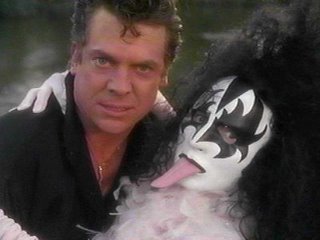 One of my favorite moments of the night occurred during a timeout game where we found out we were on the west side of the stadium and 50% of the crowd on our side shouted Westside! When you get a chance to do that in life, you have to have some fun with it 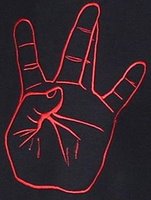 Scola had an amazing move around a player to a reverse lay-up in the fourth. He touched the guy on the ass and maybe grabbed a little (cause that’s how Quagmire rolls), but it wasn’t hooking at all. They called the offensive foul, but I think even the ref thought it was a bad call. Great move by Scola, he needs to keep his filthy paws to himself though. I swear he wears sex panther cologne.

Tracy rebounded and passed his way to a triple double on a horrible shooting night. I’m glad to see he noticed he sucked from the field tonight and that he had to get the rest of the team involved. I hope he plays like this the rest of the year. I much prefer this Tracy to the shoot until it finally goes in Tracy. And I’ll take either one, he’s a great player either way, but he’s a top 2-3 player when he passes and rebounds like he did tonight.
The end of the game was awesome. I’m not sure if it was just as a big FU to Memphis or if Rafer didn’t know that the shot clock was running out, and I don’t put it past him, but the Rockets took a 24 second violation at the end with 4.2 seconds left. I’ve never seen a team do that.

All in all the Rockets dominated from the 6 minute mark in the first to the end of the game. A 13 point victory in a game that was never that close. We had a great time and we even found a few cool giveaways later in the season as the RPD calendar showed them all. Rock on Rockets, Rock on