I wake up this morning to an email from a friend that made me sad. Here's the gist: 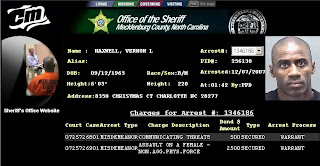 Apparently Maxwell hit a woman, and since I can easily follow that with "again", I can only assume it's true. I don't get it Vernon, you had everything, Mr. Basketball in Florida as a high school player, a great college career, ruined by NCAA violations that erased it. You got a second chance with the Rockets and made a lot out of it. But even that was screwed up by your being upset that you weren't the starter when a Hall of Fame 2 guard in Clyde Drexler was traded for. You were still an intergal part of the team, why wasn't that enough? Your tirade into the stands, which got Robert Horry and Otis Thorpe suspensions as well is what led to the trade in the first place.

I miss that killer attitude on the court, I let the incident with the team slide when:

You hit Carl Herrera with a weight
Ran into the stands (because that fan probably did deserve it)
You quit on the team, even though you faked an injury to do it (because you were Mad Max, you had contributed so much already)


But I couldn't let it go when you obviously were a dead beat dad, you couldn't even show up to the trial. You've been accused but never convicted of hitting a lady before. This time, I can't let it go. I'll always remember you as this guy on the court:


For more, this is a great article by Hubert Mizell of the St. Petersburg Times, no matter how sad the context is: Mad Max threw it all away