I'm not usually one for New Year's resolutions. Basically it's an excuse to put off things until January 1 of the next year and then get bored of this new regimen by March (I see it at the gym all the time - it's overcrowded in January and the newbies get bored of it by springtime).

That said, I think the NBA has a handful of things it should "resolve" in 2008 - and hopefully not get bored of them and back-track like it did with the synthetic basketball introduced last year (Orange Roundie!). I'm lookin' at you commish -- no wussing out on this! 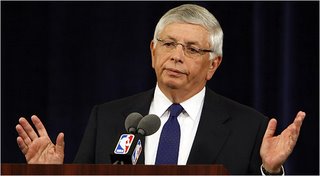 For my proposed NBA resolutions, let us begin in reverse order:

The "jump ball" has been used at all levels of basketball since the game became mainstream. The basic concept is known to all: to start the game, put your tallest guy in the center of the court and make him jump up and tap it to a teammate before the designated tall person on the other team does the same. 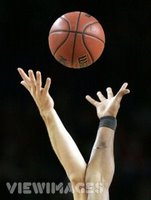 It's even worse during the game when there is a tie-up and two players claim possession. A short player may be hustling to get the ball when it's loose following a rebound or a poke-away. Inadvertently he may have tied-up the designated tall person from the other team. And then we have unintentional comedy with a 6' tall player trying to "out-jump" a 7' tall player. It's a built-in disadvantage to the guy who is quick and who hustles.

Even worse is the fact that referees still cannot make a proper "toss" of the jump ball. The average ref is probably 6' tall or shorter. And they are supposed to throw a basketball upwards to players that are 7' or taller and have insanely long arms... and this "toss" is supposed to be perfectly vertical and accurate?? How is it that after 60 years of the NBA there has not been a way to improve this concept?

It's called evolution, people. The jump ball is corny and stupid - and often a disadvantage to the team that is playing harder. Either teach the refs how to do it properly or find a new way for determining possession. Right now it's one way the college game is superior to the NBA game.

I still do not understand this rule. To this day, no one has ever been able to explain to me the purpose and the benefits of the double technical. So two players get into a skirmish. The ref blows the whistle and hits both with a techical foul? Huh?

The purpose of a technical foul is to keep order in the game and prevent players from disrespecting their opponents or the referees. Yet basketball is still a competitive event (unless you play for the Miami Heat) and by implication this involves emotions. Often heated emotions.

So, theoretically, the rule is invoked when one player says something about another player's mother... the other player takes offense and gets into the chest of the other player demanding that he take the offending comments back. To stop this from escalating, both players are typically assessed a technical foul. And nothing is accomplished. Both players still are mad at each other and order is by no means restored. Unless one player already had a technical foul and then it's highly unfair to allow one team to bait the other team to get one guy ejected.

Either give one player a technical foul... or none of them. Even stranger is that when there is a double technical foul -- neither team shoots free throws. Even the basketball authorities implicitly acknowledge that nothing is to be gained from this rule. This isn't the NFL, guys - there shouldn't be anything approximating "offsetting penalties" in our great game. This rule is annoying and it has to go. Or be improved. Maybe a penalty box?

Okay, Mr. Stern, I'm not sure there is much you can do about this one. But you did put in a dress code. And you did insert a rule preventing players from listening to iPods during pre-game warm-ups. Maybe you can help me here.

When did this stupid habit start? I mean... really? When did some player think it to be a good idea to walk towards his teammate shooting free throws, give him a high-five/low-five/fist-bump/handshake? And when did the rest of the league think this is cool and follow suit?

I'm gonna let you in on something, guys - it's f--king stupid. Stop doing it!

As a free throw shooter - it's all about rhythm. You do not want distractions or be forced to move off your spot. And you certainly do not want to have to break rhythm to tap hands with a teammate when you felt good about your first free throw. Yet to be "cool" and not be out of place, it is now commonplace to step off the line, give a fist-bump to each of your teammates trying to rebound what will now inevitably be a missed 2nd free throw, and then do it again the next time you go to the FT line.

What's the deal? It's your teammate. It's not like you just met him and/or are greeting him upon his entrance into the game. Let him shoot the damn free throw. You can commiserate on the social experience of playing basketball together at another time!

(and yes, I put a picture of Kobe here because he's seen as the ultimate "loner" in the NBA... maybe he's on to something.)

Hey, I kinda understand the impetus behind this rule. What I do NOT understand is why the NBA has not phased it out yet.

In the late 1990's the NBA wanted to allow defenses to play a modified zone defense. Instead of the traditional "man-to-man" rules where you could not double-team MJ, Clyde or Hakeem before they ever touched the ball (which was good and bad all at once). 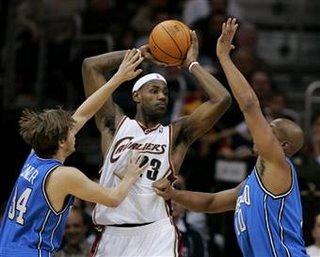 And this was a good rule change at the time. As a compromise to the idiot notion that zone defenses would make it unfair to NBA offensive players, the NBA put in the defensive three-seconds rule. Now, while you were able to double or triple team any player at any time, a defensive player was NOT allowed to just camp out under the basket and guard no one in particular.

To this I say... why not? If Yao wants to just stand under the basket and not guard anyone - how is this a bad thing for the team on offense? It clearly allows at least one player to be open at all times. Somehow the concept of "not guarding anyone" makes for a stronger defense? Now that does not make sense!!

1. The half-circle under the basket (and by implication the "charging" rules)

This is by far the dumbest thing the NBA has ever done.

A handful of years ago, to prevent flopping and to make it easier on referees to tell if a player is in position to take a charge (as opposed to committing a blocking foul), the dotted semi-circle or half-circle was painted underneath the rims on both sides of the court.

If a player is positioned inside the circle, it is always a blocking foul. If, however, a player manages to get two feet outside the circle and then fall down when the opposing player tries to posterize him, somehow that is a charging foul? 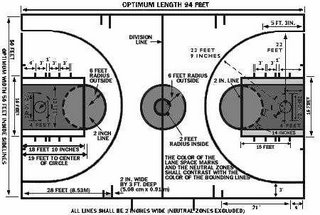 Granted, I realize that the Rockets have some of the best players at abusing this rule (Battier, Chuck Hayes, Scola, etc.). I also think this rule is f--king stupid. Not to mention dangerous.

Look, on those rare occasions when Tracy McGrady drives the ball to the basket and tries to dunk on some fool's head... he now has to worry about that stupid semi-circle. When he jumps up, the rules actually allow a slower, shorter player to be able to jump in front of the circle, stand still and undercut McGrady as he's already airborne. I'm surprised there hasn't been a devastating ankle/knee/hip injury because of this rule. NBA players fear being undercut all the time. Even on the street-court playground - undercutting another player while he's in the air starts more fights than "yo' momma" jokes. It's stupid and dangerous. And the NBA not only allows it, but puts in a rule that encourages this?

Fix it, Mr. Stern. Fix it now. Before the league becomes a bunch of drones who do nothing but try to take charges and bore-up your game. Or, as Bill Walton would say: "get up there and block a shot, big man!" 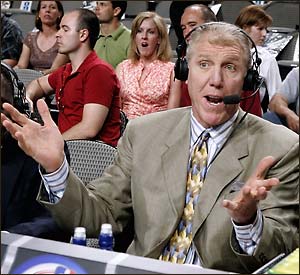 These are my resolutions and proposals to make the NBA great again.

Happy New Year, everyone! Welcome 2008 - and hopefully a re-birth for the Rockets' season.