Now *that* is how you run a balanced offense!

Share All sharing options for: Now *that* is how you run a balanced offense!

Rockets show the heart of a, um, uhhh, not quite champion, but a team good enough to play together and beat a talented Toronto Raptors squad. It's the kind of balanced offense we have been craving with this roster for some time now!

Yao, Bonzi and Rafer (?!?) led the offensive attack. No one player had to take 20 shots. And, even more impressive, there were five (5!!!) Rockets that had at least 8 rebounds. Yao finished with 25 points, 11 rebounds, 3 assists and 2 blocks... a stat line that seems redundant because he does it every single night. He just needs the help. Last night - he got it.

And the Rockets have put together a nice 2-0 run without T-Mac. A win against the Warriors on Monday night would be an excellent way to ring in the New Year.

Granted, it wasn't perfect last night, and at times it was not pretty (39% shooting won't get it done usually). But we made free throws and we made open 3-point shots. It's been the formula for Rocket victories since 1993. Feed the big man and make open shots. Pop the champagne. Simple. 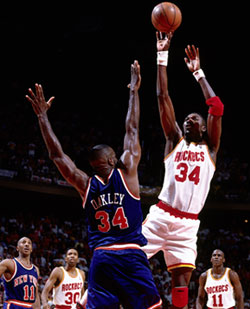