An ode to Chuck Hayes

Share All sharing options for: An ode to Chuck Hayes

I must congratulate you for continuing in the tradition of "Chuck"s to play crucial roles for the Rockets.

Before you there was Charles Barkley. 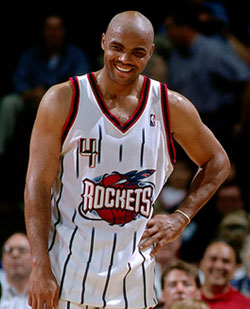 Okay, in actuality, there was the artist formerly known as Charles Barkley who we had to trade Robert Horry and E.T. to acquire. But I digress momentarily...

before the Round Mound of Rebound, there was Chucky Brown, the everlasting good luck charm. And yes, this was the best (okay, *only*) picture of Chucky Brown I could find. Which is shameful, for he helped get us a ring. And Barkley hated him for it. 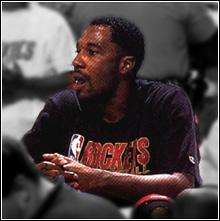 Meanwhile, Chuck Hayes, you contribute in ways few would have ever imagined. You went to school at Kentucky, a college basketball Mecca of sorts. Yet you were not even drafted. The NBA scouts thought you to be too small at 6'6" to play your position. They were only sort of right. Of course, fans in Houston took to you immediately. Probably because we can somewhat relate to you.

Chuck, your skills are profound. You are short by NBA standards. You cannot run very fast. You cannot jump very high. You have problems catching or holding a basketball. You appear to have a mental block in making a basic chest pass. You cannot make a jumpshot to save your life. You have issues with layups, too. Your free throw form is abysmal (but you were not responsible for the 6-for-22 game). And yet........... you are everything the Rockets need at the position right now.

You don't have the typical NBA ego. You don't need the ball in your hands to be effective (Thank God!). Even with your physical faults and shortcomings, you are still the best rebounder on the team. You relentlessly hustle (unlike others, *cough*Rafer!*cough*). You know your role on the team. Okay, so you aren't Robert Horry, but no one can meet that standard.

Hell, John Hollinger loves you and your PER. This cannot be overstated. Hollinger expects us to win the Championship, so we like Hollinger here.

Apparently you are beloved in China, too. (How the hell do you have a shoe contract with a Chinese manufacturer? Wow.) The time has clearly come for you to be recognized. 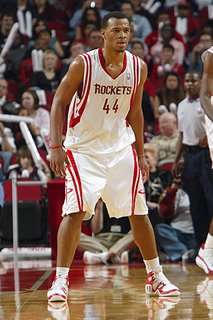 Chuck Hayes, we salute you!