People That Piss Me Off (Week the Sixth)

Share All sharing options for: People That Piss Me Off (Week the Sixth)

It's the middle of the holiday season, so I'm supposed to be happy and all that, right?

Yeah... F that. Not with a 13-15 record and T-Mac scheduled to miss at least two games. McGrady is possibly returning to play against Golden State on New Year's Eve. Let's hope he chooses not to approach that game the Rex Grossman way. You, Tracy, are no Sex Cannon.

So, to make me feel slightly better and using this forum to rant and rave as usual, here's who pisses me off this week:

You see, Peyton - THIS is what you were supposed to be doing last weekend: 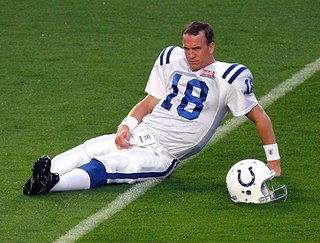 But, noooooooooooooo... you just had to play against the Texans in a game that meant nothing to you or your own team. Thanks. Look, I know you're the best QB. (Yeah, even better than that Brady guy.) I also know the Texans beat you last December and that probably made you mad. But, come on - Mario and the boys were soooo close to a winning record. You just had to tear their heart out. F'n grinch.

Dude, it's not all about Peyton. Maybe try to actually hit a WR in stride for once, and not throw it late and behind everyone. Just a thought. Or is this your way to rebel against the awesomeness that is Christmas?

Because I feel like it and you've escaped my wrath for a few weeks now.

If we had a legit point guard I'm quite sure we wouldn't be 13-15. Your stats so far this season: 38.4% shooting (which matches your career average by the way), 9.3 ppg, 29.2% on three-pointers (even though you are open every freakin' time you shoot from there), and a so completely not surprising 59.4% from the free throw line. That is sad. You are a guard... who has made 19-32 free throws. You've played over twenty games and have slightly more than 1 FT attempt per game. And averaging less than one make per game. Good God you suck. 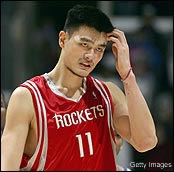 (caption: "I am confused. Why can't the new guy with the funky offensive system trade the spastic one who dribbles too much to Miami? Or just tell him the game got cancelled when it really didn't? I do not like Mr. Rafer.")

... and that's all for this week. On Monday I'll have an in-depth analysis of NBA resolutions for 2008 - also known as things the League needs to change ASAP.