Share All sharing options for: Rick Adelman is funny

With the Rockets 9-9 and still carrying the dead weight that is Rafer Alston, at least I can find comfort in the fact that our new head coach has a sense of humor. From today's Chronicle column concerning the Rockets' season-long shooting woes:

"If you're missing shots, you have to do something different," coach Rick Adelman said.

no shit? really? Someone needs to get that memo to Rafer. Maybe 8 copies of it (Rafer better have at least 8 bosses to answer to by now)

"You need to attack the basket more, which is one thing we haven't done."

Please, please don't give Rafer any ideas. Encouraging Towelie to attempt layups or that "flip" shot he constantly bricks is a worse idea than the Jump to Conclusions Mat.

Of course, if you wanted to play Kirk Snyder more - he's kinda good at just that very thing - attacking the basket with authority. You might even wanna directly tell McGrady to stop being such a wuss and try a few layups, too. But the rest of the roster lacks that ability to get to the rim and finish. I call that the Kenny Smith syndrome (completely unable to finish simple layups, but for some reason feel more comfortable shooting from 25 feet away).

Oh, wait, Adelman was on a roll, I don't want to stop him:

"We don't take it to one more pass," Adelman said. "When you're not shooting it well, teams are going to adjust and take it to the good shooters. Even when we were 6-1, I was concerned that we weren't getting enough production from other people."

You have Yao and T-Mac. You can't complain about their production. Battier is a solid offensive player, but he seems misused and limited to corner-side three point attempts. And no one is going to confuse Battier with Ray Allen, Michael Redd or even Bruce Bowen. Rafer sucks. Hayes has no offensive game, but he's smart enough to realize this. Scola has potential, but you won't play him enough to find out what he can give you. Stevie was rotting on your bench until recently (though I agree - he is not the solution to your problems). Bonzi theoretically should be this spark to give extra "production" but he must have attended Shaq's fat camp again this past summer - he's moving extra slow.

Maybe the coach should adjust his gameplan to fit his roster??

"You tend to go with what you know is good," Adelman said. "In the long run, you'd like to see them be more facilitators, especially Tracy, where he can get guys other shots."

Hey, maybe find a point guard? Isn't Rafer's entire *job* to be a facilitator of the offense? Oh, wait, yeah, he sucks. And yet he is still starting over Stevie, Mike James AND Aaron Brooks?

If Adelman sticks to this plan, I foresee him taking the Hoosiers approach to extremes - only Yao and T-Mac get to play until the rest of the team learns to follow instructions.

Meanwhile... Shane Battier? You, sir, are not funny:

"It's a different feel. You have to adjust. But as a shooter, you always feel that you're just a shot away."

Simple lesson, Shane. This man is a shooter: 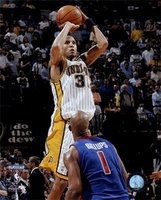 You are NOT this man. You have many skills, Shane, but you are NOT a "shooter." Adjust accordingly.