The Sports Guy is pissing China off (and me)

Share All sharing options for: The Sports Guy is pissing China off (and me)

Not much mention of Bill Simmons has been made here on this blog. No real need to, for it's not like he needs our help to build an audience. But now he's overstepping his bounds. He claims to be a semi-guru of the NBA game. This year's "Trade Value (Top 50)" column is nothing short of a traveshamockery when it comes to the Rockets.

Though before we begin -- Remember, China - your new target is this man: 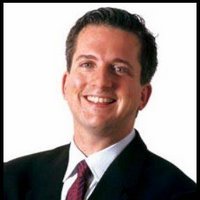 How does this concern the Houston Rockets? Simple, T-Mac and Yao are on the list and analyzed - but not necessarily in a positive way. (Yao is #9 and still gets trash-talked by a 5'10" white dude from Boston with a bad accent.)

# 28. Tracy McGrady I had him eight spots higher until the last second, when I remembered he hasn't won a single playoff series and makes $20 million a year.
___

For context, here are the three players listed immediately behind T-Mac: 29, David West; 30, Caron Butler; 31, Josh Howard. Are you f'n kidding me?

If the Mavericks called up and said "hey, any chance you would trade T-Mac? Josh Howard might be available!", Daryl Morey would do an Austin Powers/Dr. Evil-esque 5 minute laugh until he realized it was a serious question. Same for David West and Caron. Caron Butler was traded for Kwame Brown once, and no one has really classified that as the NBA's version of a Bagwell for Larry Anderson trade. And I like David West, but he's not a franchise player. Nor is he the next Carlos Boozer.

Granted, I realize T-Mac has not won a playoff series. I also realize I've been criticizing him for being a wuss and a 4th quarter liability of sorts. That doesn't mean I am ready to trade him for a one-dimensional role player. And if "playoff victories" is the measure of everything, how is Dwight Howard #2 overall? His team got swept last year. The Freak has yet to even win a playoff GAME. Kobe has not won a series since Jerry Buss sold the FatAss out of town (and you have no idea how much it kills me to use Kobe as an analogy here).

Meanwhile, SG has Baron Davis at #15. Yes, Baron Davis. He of the Beard, the wayward 3 point shot, and the constant injury concerns. T-Mac is a more skilled, evolved and better shooter than Baron Davis. Yeah, Davis won a couple playoff series... so what? He hasn't won a ring - and he's not winning one this year, either.

I think the California air is polluting SG's brain. Too many Jimmy Kimmel jokes might do that to you. But T-Mac doesn't even get the worst of it. Here's Yao:

9. Yao Ming His untradeableness (probably not a word, but we're going with it) has been heightened by his value because of those aforementioned Chinese marketing ties. (I'm going out on a limb and guessing that it's lucrative to be the preferred NBA team for a country with more than a billion people.) On the flip side, his defense continues to cause problems, and he hasn't had the statistical surge everyone expected from an All-Star center in years five through seven of his career. If anything, he has regressed a little. Right now, he's a rich man's Rik Smits and that's about it.

Here's my question: Looking at the last 10 guys on this list, with the exception of Yao, each of them gives you a legitimate chance to win a title within the next five years as long as they're the best guy on a really good team. Could you say the same about Yao? To this point, no. Even Smits had some huge moments for the Pacers in the mid-'90s and ended up being the most underrated center of his generation. What has Yao done? His value has been completely distorted, as evidenced by the fact Houston never would have offered him straight-up for KG last summer ... even though KG clearly would have made the Rockets a better team. At some point soon, Yao needs to carry a good team or it's never happening. To be continued.
___

A poor man's Rik Smits? Ha ha. That joke was funny back in 2003 in Yao's second season. Just because Yao has a super-sweet jump shot and can make a free throw does not make him Rik Smits. Fuck it, let's compare:

Smits NEVER averaged more than 18.5 ppg in one season. Yao averages 18.8 for his career, and averaged 25.0 last year (and will probably hit 25 ppg again this season). Smits NEVER averaged more than 7.7 rebounds per game in any one season. Yao averages 9.0 for his career, and will probably hit the 22/10 level or better this year. To compare the two is an insult, and is done only because Yao is a better shooter than Shaq or Dwight Howard and no one has ever seen a player like Yao before. The dude is 7'5", can shoot, can shoot *free throws* and is possibly the strongest person in the NBA right now.

Yao has gotten better EVERY single season he has been in the NBA. He's all of 27 years old. (Hakeem didn't win his rings until he was in his 30s, oh, by the way).

Oh, and let's also point out the players ahead of/behind Yao: Kobe is at #10 (that's a joke in and of itself, but this isn't a Laker blog), Boozer is at #11 and Dirk is at #12. Okay, that's great company to be in. SG somehow dismisses all of this by saying Yao gets rated higher because it's convenient to be the favorite team of a country with 1 billion people watching. Yeah, it has to be that... or maybe the fact that he can do this in his sleep: 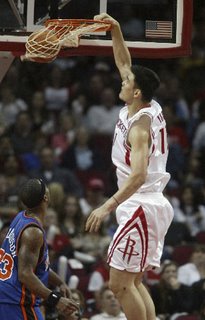 We do not appreciate xenophobic, backhanded compliments here. Then again, this is more fuel for the "Yao is Angry, and you will not like him when he's angry" fire. Suck it, Sports Guy! You can go back to fellating Kevin Durant now.