Yao said the Rockets are soft. I'm quite sure his use of the term "soft" was not directed to the team's shooting technique. Especially on free throws. Having a "soft touch" is a good thing when referring to the art of shooting a basketball.

The Rockets, however, did everything they could to prove to Yao (and others like me) that they are by no means "soft" - and if that required the Rockets to brick 16 free throws... so be it. 6 for 22? Are you freakin' kidding me? 1 for 15 to start? It was so bad Bonzi was hoping for an out of bounds play instead of a shooting foul. Rafer resorted to hugging referees and begging for help. 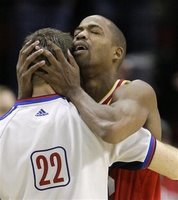 That shooting display would embarrass Chris Dudley. Yes, he of the career 45% FT mark, and the worst shooting technique ever seen on an NBA court. And after last night, he can claim to be twice as good as the Rockets.

T-Mac, ever the leader and never one to make excuses (*sarcasm*):

"It's mental. It's definitely mental," McGrady said. "It's just you and the basket. The fans definitely don't make it easy on you. Every time you miss a free throw, 'aarrghh.' That's the worst thing you can do to a player. He's thinking about it every time he goes up there."

"Bad night at the free-throw line, but we won the game." Yeah, you won... but it better not be providing you false hope.

I'm telling you... McGrady is taking steps to be the next Nick Anderson! Blaming the fans? Hella-weak, dude. Even some of the journalists are (finally) starting to pick up on this. From the Chronicle today:

"That's what makes McGrady so exasperating at times. There are times when he can do that sort of thing almost at will [the end of 1st half dunk]. The trouble is, that will tends to have a second-half expiration date."

I yelled at the TV at least 3-4 times in the fourth quarter last night. McGrady was killing the Pistons in the first quarter by taking the ball strong to the basket. The end of half emphatic dunk was the highlight of the game.

Then, during crunch time - Tracy became jump shot happy again. Taking 3s instead of driving to the basket and putting pressure on the Pistons' defense. Bailing them out constantly. Next thing you know, a 10 point lead is a 2 point lead. 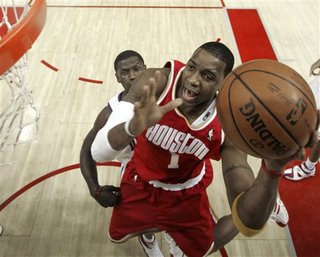 Hey, guys, hate to break it to ya... but that's exactly what Yao meant when he said you were "soft" - taking the quick shots early in the shot clock that Detroit is hoping you shoot to save them the effort of playing defense. Even Rasheed picked up on this:

Rasheed will get his chance... re-match is Sunday December 23rd - in Detroit.

Toughen up, Rockets - it does not get any easier from here.