Tracy has an ouchie

Share All sharing options for: Tracy has an ouchie

McGrady... hurt again. Possibly out for a week. Of course, T-Mac is being "cautious" about this new injury. 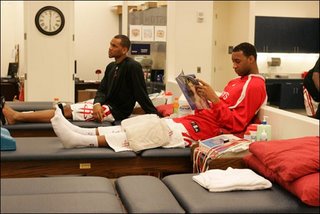 (though, I am tempted to ask him if he is "hurt" or if he is "injured" - as Coach Sam Winters explained the difference quite eloquently 14 years ago. If he's "hurt" he can still play.)

And what the hell is that he is reading in the trainer's room?? I'm surprised Tracy doesn't have pictures of his family around his bed - he's there often enough to make it a part-time office. Anything to make him feel more comfortable, right?

Of course, as much as I like making fun of McGrady for being the NBA equivalent of Mr. Glass, the fact of the matter is that the Rockets need him. The Rockets are 11-42 without McGrady since he joined the team in 2004. That's a pretty awful record (it actually looks like our game-by-game free throw numbers!). It's clear that McGrady's mere presence on the court is quite valuable to the team. If only he had the proper motivation. 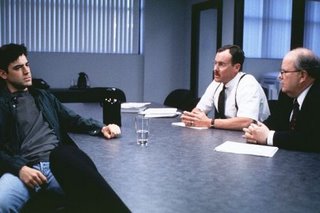 I'm sure Les Alexander's figurative stock does not go up by a quarter of a point when McGrady is in a suit on the sidelines........

What do we do in his expected absence? Friday sends the Rockets to Memphis. If we can play the way we did the last time we faced the Grizzlies, we should be okay. Of course, McGrady was the ultimate distributor in that game. Without him, we now rely on Rafer and Stevie and our midget rookie. That could be ugly. I still say we chalk up a win Friday.

After that, Toronto and Golden State come to Houston. We should match up pretty well with Toronto. So long as we can neutralize Chris Bosh. Golden State is a matchup nightmare for us. Especially with no T-Mac. Don Nelson will likely expose the Rockets for what they are - the least athletic team in the NBA. We are young, but we have no athletes (except McGrady). How is it we've gone a decade without drafting at least one "live body" who can cut/slash to the basket and create offense for himself???

Anyway, by the time McGrady returns, I say we're staring at 2-2 without him, and 15-17 overall. There is still much work to be done.