It’s Lee bitches…
I’m back and the Rockets are too after a long layover from the playing like shit tour. I had a great vacation and it’s extending into tonight because I just got back from some gumbo and fried shrimp at Pappadeaux’s and forgot to start the DVR so it’s there were only 9 minutes left in the first when I started watching. The Rockets are back to the scene of the start to their downfall, their first loss of the season and the awful, yet talented Memphis Grizzlies’ Fed Ex Forum.

So far Yao seems to be taking the game seriously with TMac out resting his laurels, or whatever you rest when you aren’t really hurt but don’t want to play. Unfortunately his aggressiveness tonight has got the best of him and he has 3 fouls. Again though, he doesn’t whine when he actually fouls someone, so I don’t get why refs don’t see this.

Aaron Brooks is a better passer than I remember him being at Oregon and has really impressed me with his, "I don’t give a shit, I’m a good player" attitude. He shoots the ball ridiculously fast; his release is perfect for creating his own shot. I am beginning to like him similar to how I liked Sam Cassell his rookie year, and that is a huge compliment from me. The best part about him is that I don’t have to bitch about how much Rafer sucks because he is taking some of his minutes. Don’t get me wrong, Rafer still sucks shit through a straw. (That has to be a top ten phrase for how much someone sucks, right?)

Mike Miller kills me; he is way too good of a basketball player to be as shitty as he is.

Dikembe is one of the best arguers in the league. I have literally never seen him leave a call alone. I have no idea what he says though, it could be like Dick Bavetta and Charles Barkley, just a lot of jawing but him asking how the ref's kids are. But regardless, he talks after every single foul called against him. And because he’s the cookie monster, it actually doesn’t bother me. The guy makes me laugh. I think the guy in charge of that commercial with all the foreign NBA players lets him speak just so I can get a chuckle.

Rockets have been really good about the 2 for 1 situations this year, and it’s no different at the half this time. They run Adelman’s offense perfectly in those situations. The rest of the time you ask? Not so much… This half time they actually get a 3 for 1 because Stromile Swift traveled, but couldn’t capitalize on the third chance. To be fair there were only .3 seconds left, so it was a touch and toss situation for Bonzi. We were up 12 at one point and the Grizz got it to one, but a 9-4 run by the boys in red got it back to 7 at the half.

You know what sucks about Rafer more than anything? He seems like an okay guy when it comes to charity off the court. Obviously he’s had his breaking laws fun, but it’s mostly been little stuff. He always seems to be on at half time doing stuff for da kids. Also, his girlfriend Ashley Walker is kind of hot. Of course he’s got some bank so that’s really not a surprise.

I’m headed to the Texans game n Sunday, and then every second of my sports energy can be focused on the Rockets. The Texans have a chance to finish 8-8 and give the city of Houston (or at least those non-Titans traitors) a little hope going into next season. Seriously, I love my Longhorns, I love Vince Young, but on the field, in the NFL, he is the enemy. I wish him good luck, but nothing but losses against the Texans. And speaking of the Horns, congrats to the good guys in Burnt Orange for their 7th consecutive 10 win season, the third best such streak of all time, one better than the poster boys of ESPN USC I will add.

The Rockets come back from half time with a bit of hustle; I like it when that happens. I don’t like it when Rafer shoots the "tearput" though, that thing always infuriates me. Clyde actually said he thought he was at his best when he was doing that, I guess he just sucks a little less when he does. Though I will give him some backhanded credit, he has been playing better since Aaron Brooks became a factor; it’s too bad he couldn’t do it on his own. I’ll take him sucking less in any way I can though.

Seriously, Mike Miller has all of the tools, he can shoot, jump, pass and rebound, but still sucks, his lack of motivation pisses me off. I had all of the drive, but just didn’t have the natural skill. Truthfully, the Grizzlies as a whole are a bunch of disappointments. Miller, Gasol, Swift, Darko, all potentially great players, all woeful underachievers. The entire team seems to be exactly what the Rockets aren’t and that is crazy athletic. I guess I’ll take what we have if that is what you get with athletes.

The Rockets are playing like a team and Yao is not F’ing around when he’s near the basket, he’s emphatically dunking it every chance he gets. I honestly think he’s sick of this crap about not being able to carry a team. He is even running the court and going after every lose ball. That could get him in trouble, but I still like it. If they keep letting Swift go over Yao’s back, I’m afraid Yao may punch him. Yao with 17, 8 and 2 blocks with 3:07 left in the third really seems to be playing well and doing it within the offense. Right after I typed that Yao gets called for a foul on a play where he wasn’t closer than a foot to Gasol the whole way. I’m not sure why I have to stress the fact that Yao does not bitch when he fouls or when he’s not fouled, why the hell do refs not get this? He also reacts pissed at himself when he does foul, so if in doubt, watch Yao’s reaction, he’ll tell you if he screwed up or not. Do I really have to start a letter writing campaign to the NBA???

The Rockets defense tonight is the best I’ve seen them play in weeks. The Grizz aren’t shooting terribly and they are trying as hard as they can. The Rockets are just stopping them. At the end of the third, the Rockets were up by 13, just need to keep it going for another 12 minutes.

Aaron Brooks is in the game to start the fourth; that warms my heart. As ugly as it is, his herky-jerky dribbling is awesome. He brings the ball up efficiently and quickly, it’s exactly what I want to see when he comes in. His defense is definitely lacking right now, but with his speed that can be brought around. His speed is his equalizer for his height, bigs can’t guard him to block his shot so he can go into the trees to penetrate.

This post wouldn’t be complete without talking about Luis Scola or Shane Battier; both are having complete games tonight, and playing good individual and team defense as well as playing well on offense. Scola looks like he should be the second banana at times on a team, I still think after the All Star break we are going to find our stride. It is up to a 20 point lead with 6:45 left in the game. They are using the shot clock and taking time off, I love the slow down, 4 to 5 pass till you find an opening offense when you have a big lead.

It’s nice to be back to blogging and I really enjoy keeping these as running game blogs. I like piecing them together from notes as well, but it always seems to flow better like this. Maybe it’s because I’m not a real writer, I’m something better, more refined for today’s day and age, a blogger if you will. Plus, I get to type and laugh at the same time at stuff like Bill Worrell commenting on Quagmire with something like: "It’s great to be ambidextrous, he likes to use either hand". Unfortunately he followed it up by saying that it’s good for the Rockets that they are proving they can score without TMac. The problem with that is it can be good, but only if Tracy allows it to be. He has a tendency to try and show why he’s important after he comes back from being hurt. Regardless, I like 15+ point wins anytime they come. Hell, I like 1 point wins, I just like to win.

22 and 11 and 4 for Yao with 2:46 left, yes, he’s good. Just in case anyone was still wondering. His hustle and desire to play as a team is the defining aspect of this game. I love the guy. He’s not Hakeem (and people need to get over that) but he’s a hell of a good player and will easily go down as the best center of his era, that’s all you can ask of a guy. At the end of the game Stromile Swift was apparently trying to prove some crazy point, Yao dominated him on three straight possessions and proved his point wrong. I’m not exactly sure why people think he can’t play defense, it’s just absurd.

Great game by the Rockets, a 103-83 win. Game ball goes to the entire team. Check out this box score. 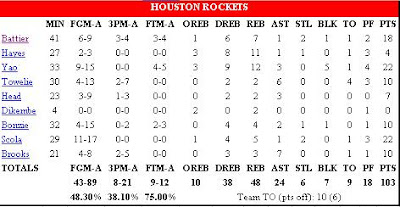 Six players in double figures and Hayes had 11 rebounds so I’m calling it 7. Towelie still sucks and Bonzi really does not have his shooting touch right now. I’m assuming it will come back since, unlike Towelie, he as had one in his career.

Great game Rockets, let’s keep it up. The Raptors are up tomorrow night, let’s make it two in a row!!