We have no hope of a TMac trade

Share All sharing options for: We have no hope of a TMac trade


If you were so inclined that is. I've been over the NBA Trade Machine over at ESPN.com and it doesn't look pretty. Good thing I don't want to actually trade him (unless LA is really this stupid).

Honestly, the best we can do past Kobe is a bag of corn chips, and some crappy players. Well, at least on trades teams would do. I mean, if Chicago wanted to do this, I would immediately change my mind about trading him: 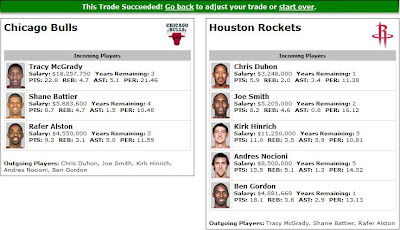 And this is from a guy that thought Hinrich was going to be a huge bust in the NBA. I still can't believe that he has succeeded at the level he has, but I'm pleasantly suprised. He killed my Horns while at Kansas, I really should have believe in it more. But come on, cut me a break. He's a white boy from Iowa for goodness sake! To be fair, that trade is ridiculous though, I can't see the Bulls doing it, the Rockets would be dumb not to consider it though.

If the Rockets could do a sign and trade, or a maybe could get Gilbert to agree to sign an extension, I'd love me some Agent Zero action. And I believe him, I think Yao can get his shots too.

Honestly, here's the only trade I can see that works for both teams.

I really like Ron Ron, and his craziness. His D is what most people think Shane Battier's is. And he has a really good offensive game. Bibby's contract is huge, and I'm betting the Kings want out from under it, but he's exactly what the Rockets "need".


Alright, I've convinced myself, trading TMac is just dumb and instead, I'm just going to request he remove