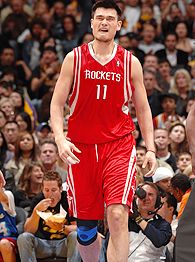 Rockets fall back to .500 and mediocrity after a 100-88 loss to the Sixers. Wait a second, we lost to freakin' Philadelphia. They have an aging Andre Miller (still better than Rafer) and Andre Iguodola - and that's it. They just fired their GM last week because he spent 10 years killing the franchise. And we just lost to them?

Yao post game: "When you are soft yourself, everything will feel tough," he said. "It's not because they are so tough. It's because of how soft we are."

It's hard to argue with that. The Rockets lack an enforcer of any sort. Chuck does the dirty work, but isn't exactly Dennis Rodman crazy. Bonzi *is* crazy, but he's too out of shape to start (or finish) a fight. McGrady's back could lock up at any moment. Dikembe just makes people laugh. Rafer sucks at everything, so I don't expect him to be any good at sparking some anger in the team. And Battier is the whitest man alive. 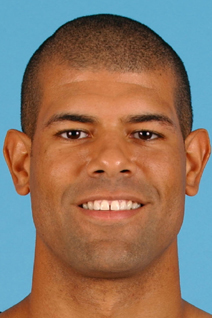 From the game recap:

Until the fourth quarter, when Adelman benched his starters, the most emotion the Rockets demonstrated came with a brief shouting match between Shane Battier and Mike James.

It's not exactly going to rise to the level of Kobe and the FatAss throwing down on the Court, and Mike James was probably just telling Battier to wipe that stupid look off his face - kinda like Butters getting grounded for looking funny in his school pictures.

One more game like this, and Yao should begin running amok and killing everyone in alphabetical order... beginning with you, Mr. Alston.