10 Things I Hate About You (Utah Jazz)

Share All sharing options for: 10 Things I Hate About You (Utah Jazz)

In light of Heath Ledger's surprising death this week... 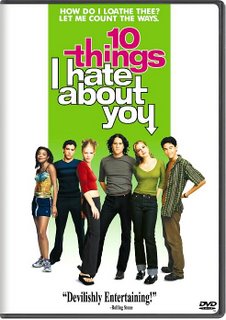 Hey, FU - it is a really good movie. Anyway, here are 10 Things I Hate about the Utah Jazz: 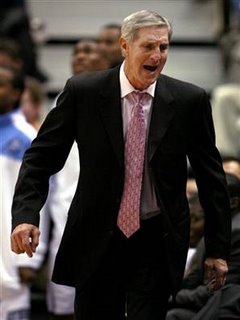 Seriously, does anyone really like this guy? He's a complete bully. His players respect him only because he does know a lot about basketball, but there has to be a better way to get the message across. He constantly berates his own players, the referees, and even the fans. He encourages his players to flop and play dirty. He is homophobic and vengeful. I'm actually glad he's never won NBA Coach of the Year. Fuck him and the tractor he rode in on.

Yes, I threw a party the day Karl Malone retired. I admit it. 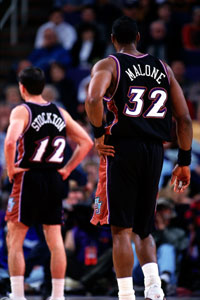 These two fuckers made me hate basketball for a long time. Hakeem, Otis, Horry and Clyde constantly had to deal with their dirty tactics and flopping. Karl Malone was the worst. He was a 6'9", 260 lb. power forward who would fall down, flail his arms and whine whenever a 6' tall, 180 lb. guard had the audacity to touch him. Pussy. Ask Isiah Thomas. Malone is a coward and a wuss.

Stockton gets a little more respect, but he was still pretty much everything that was wrong with basketball in the 90s. He had no problems throwing elbows, stepping on your feet... anything to get a slight advantage. If you tried his own tactics on him, he'd act like he got shot, fall down and bait dumbass referees into calling an offensive foul. Sam Cassell was dragged down by his jersey in the playoffs - but Stockton undercut him and got the foul called on Cassell. What a hypocrite. Damn I hate the Jazz.

Yeah, the owner. F him, too. He's always got a problem with something. And I can't overlook the Heath Ledger/Brokeback Mountain/Miller refusing to let it play in his theater issue, either. He was the enabler for Sloan, Malone and Stockton. And now he encourages dudes to stab blind men in the front for money. Speaking of...

If this were a college basketball blog, there'd be a few "I hate Duke, too" posts, but it is not. I can still hate Duke alums (you're cool though, Battier). Boozer, however deserves whatever bad things karma has waiting for him. Cleveland drafts you in the second round, they WANT to help you out and pay you more - even though they didn't have to. So what do you do? You agree to a contract verbally... then turn around and sign with Utah when Cleveland lets you out of your rookie deal. You, Boozer, are an asshole of the first degree. And you are one of the few things that make me regret having HDTV. You are one ugly mofo. 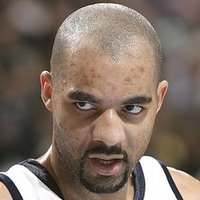 This is more of a Tracy McGrady issue... but it also fed my continued hatred of Utah. Dammit Tracy, why couldn't you at least attempt a layup!?!?!

Ugh... 10 years later and you still annoy the piss out of me. You make a name for yourself by playing typical Utah Jazz basketball. Cheap, dirty and unncessarily physical. The worst part is that the Rockets had to sign you later just to avoid having to play against you. Which only served to backfire against us because you actually were never any good.


Of course, what you don't see in this video is Malone tackling Drexler as he tries to guard Stockton. Naturally, the referees are asleep. Way to lose to the Bulls in the Finals though. Good job, Utah.

I see this on Deadspin...

Seems like a pretty fun party, huh? Exactly. The Jazz even find ways to fuck up what should be a totally kick-ass NYE party! The players actually got embarrassed by these pictures and made public statements that the party was tame and that family members, wives and kids were at this event... so very, very lame. You probably served punch and pie instead of alcohol, too, huh?

Yes, Kirilenko did not hook up with the girl in the photo. Even though he gets one free pass from his wife a year. Weak.

The "Utah Jazz" were originally the New Orleans Jazz. Which makes sense. New Orleans... music... mardi gras... jazz. Seems like a good time. Then they move to Utah. And somehow *keep the same name*!?!?? There is no jazz in Utah. Your city is freakin' boring. I guess you just didn't have the creativity enough to come up with an original name. God your team and your city is lame.

I hate him so much he gets two mentions. Fuck you, Karl Malone.

Jimmy Kimmel's "Karl Malone" is probably smarter than the real one. Have fun hunting little mexican girls you oversized redneck.