B12 and Lidocaine are Life's Little Miracles

Share All sharing options for: B12 and Lidocaine are Life's Little Miracles

The Dream Shake was founded to talk about everything Houston Rockets, but we certainly reserve the right to talk about whatever we want (It's my ball, if you don't like it I go home and take it with me!) And to me, Roger Clemens stating that the steroids he is accused of injecting were:
"Lidocaine and [vitamin] B-12. It's for my joints, and B-12 I still take today,"

Why do I care about this little story? Because Roger is a Houston, University of Texas, Red Sox and Astros icon. And those all happen to e things I care a lot about. Yes I know he plays for the Yankees, I try to ignore that because I genuinely like Roger. I've met him multiple times, he always been great, especially with kids. He signs autographs, and will shoot the shit with you, I like that in my sports heroes. Plus, he came home (even if he went and played mercenary this last year) and that is a big deal to me.

Here's my quandary, we all know Roger did the roids and the HGH, I just don't care. I also don't care that Jeff Bagwell or Barry Bonds did them, or the other 85% of the players in the MLB. It just doesn't matter to me. And some can say it was against the rules, but an unenforceable rule is not really a rule in my book. And hell, HGH wasn't even against said rules until much later. The problem I have is that Roger is obviously not telling the truth, and I'm not sure why. He lives in Houston and people idolize the man here. He was unlikely to play baseball next year and has more money than a few of the owners in the league (not based in fact.) Why does he care? I mean, he's a man, he's over 40, so maybe it's just a fire that says he has to defend his own honor. But come on Roger, just let it go.

That's not to say in any way that he should have, or anyone should have for that matter, cooperated with Mitchell. Fuck him and his witch hunt, he had no authority and had no right to ask anyone to come talk to him. You are a fucking idiot no matter how innocent you are if you would have talked to him ahead of time.

Roger, I'm just going to have to remember you like this: 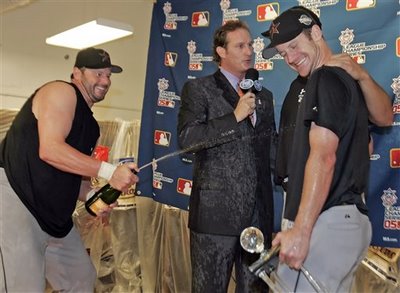 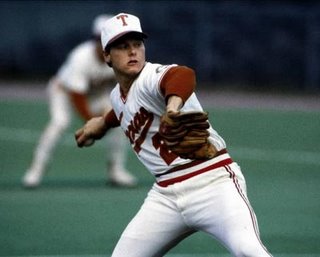 The good news is that while it's a ridiculous traveshamockery, I won't have to see you in Cooperstown with a Yankees hat on your plaque.