A day of praise for those not quite good enough

Share All sharing options for: A day of praise for those not quite good enough

The NBA All-Star starters were announced over the weekend. Yao and 9 other dudes made the lineup for the East and the West. Meanwhile, T-Mac can make different weekend vacation plans this year. 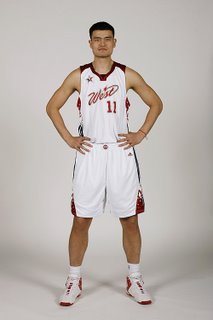 Sometime today, the rest of the All Star rosters will be announced. No, I do not expect T-Mac to be named as a reserve either. T-Mac even said he doesn't want to be on the team. Because I have to wait another day for the Rockets to play, and the Pacer/Rocket preview will be posted tomorrow when I find the time... today I present who *I* think should be named to the All Star team (and let's just say it's decidedly different than Marc Stein's opinion).

This leaves seven more positions to fill, 2 guards, 2 forwards, a center and two "miscellaneous" types to reward those for good behavior who weren't quite good enough to be obvious picks.

Anyone who suggests anyone else to be a guard on the Western team is off smoking crack with the aforementioned Mr. Stein. CP3 is having the best statistical season for a PG since Kevin Johnson was rountinely tossing out 20 points and 10 assists a game for Phoenix. And the Hornets would be the #1 seed if the playoffs started. Paul is in. Nash is Nash... even though I don't trust him with his beady eyes and flapping head, he's a two-time MVP who is actually playng better this year than in the MVP seasons. Besides, if I didn't pick Nash, he'd probably charge at me with his hockey stick or whatever weapon he might be carrying.

Dirk is obvious. Reigning MVP for a tough Dallas team who is once again one of the best players in the NBA. Easy decision. Boozer is not so easy. I hate rewarding disloyal guys who stab blind men in the front for more money. Plus he went to Duke. Fuck him. And yet... Boozer is playing out of his freakin' mind this year. Double-doubles are overrated, but he's a league leader there. Aw, hell, I hate talking about Jazz players. Moving along. Sorry, T-Mac, I can't pick you either. It would be wrong and shamelessly homer-ific of me.

Anyone who says "Marcus Camby" can bite me. For that is the wrong answer. He wouldn't even be in the top 3 choices for reserve center. Amare Stoudemire, Chris Kaman and Tyson Chandler are ALL playing better than Camby. Camby is great at rebounds, blocking shots, and leaving the guy he's guarding open while he tries to block shots. He is not great at scoring points or contributing in other ways. Sorry, that's not all-star worthy to me. My pick is Kaman. The Caveman plays on an injury-riddled team that's missing Elton Brand. So what does the Hogan look-a-like do? He starts playing like Elton freakin' Brand! Much respect. And it allows Yao to crack jokes about how you can't f--kin' stop him all weekend. I can't overlook that.

Stoudemire plays no defense at all and is generally perceived to be quite the dumbass. But he's exactly what we want to see in an All-Star Game. So, he's in. Brandon Roy has led a very, very young Portland team to a potential playoff run. And he impressed the hell out of me last week during the Rockets victory over them. Sorry, Deron Williams, no way I put two Jazz players on my roster. And Baron Davis? I saw his 6-22 effort on Tuesday... no way he's an All-Star over these other guys. Stephen Jackson? I like you, but no. Manu? Mr. Eva Longoria? Oh, hell no - Timmy made you guys famous, and if I put any other Spur on the roster we all know it would be Robert Horry. Spare me your sob stories!!

Projected MVP? CP3. Or Kobe. One of the two. Kobe is the only guy who takes these games seriously... and CP3 is playing at home.

What's that? You want to know who I'd pick for the Eastern Conference? Uh, other than KG and LeBron, who gives a shit? the Eastern Conference sucks and I only want to know who makes the East roster just to make sure that the Fat Ass does NOT make the team. Even though he's begging and pleading, yet his own coach doesn't fully support him. Shut yo' trap, Shaq. You are not an All Star anymore.