Not to steal any ideas or concepts and especially not trademarks from the guys over at FreeDarko (for my vocabulary just is not expansive enough to compete)...

but the Rockets need to free Luis Scola. Now. When the trade with San Antonio was made over the summer, whereby we acquired the rights to Luis, many thought our problems at the power forward position were solved. Chuck Hayes is a very solid role player (translation: he can't shoot or pass, but he knows his role). Luis Scola, however, was expected to be a very skilled offensive player who could also contribute with a respectable amount of defensive rebounds. It made for quite a good day when he was introduced as the newest Rocket. 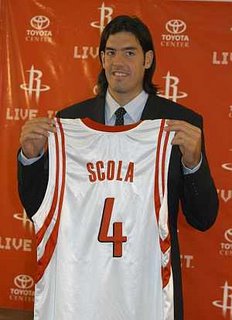 Hell, they even gave Scola jersey #4 -- i.e. the same number Barkley wore when he was with the Rockets. That could not have been unintentional.

In pre-season, in large part due to the acquisition of Scola, John Hollinger picked the Rockets to possibly win the NBA Championship and also compete for 60 victories on the season. To paraphrase Kenny Mayne - that would be a (Rockets) record. Sadly, with the Rockets languishing at 15-16, we'd have to go 45-6 over the rest of the season to win 60 games. Yeah, that's not happening.

Scola has not been the second coming of Barkley (yet), but his stats are misleading for many reasons. He's averaging only 7.4 ppg to go with 5.1 rebounds and an even 1.0 assists. Though upon closer inspection you'll see he's getting these numbers in only 19.6 minutes of game action. If Scola played 40 minutes, he'd average 15 points and 10 rebounds. We could not ask for more from him as the third option behind Yao and McGrady.

Scola has clearly been more productive offensively than Chuck Hayes. He's not that far behind defensively either (though he does seem prone to stupid fouls and mental errors in team defense at times). Why then does he seem to rot away on the bench in the 4th quarter? Apparently - I am no longer the only one who notices this. From ESPN.com - David Thorpe's Rookie Analysis (where Scola is ranked #5):

Analysis
December 26, 2007
Every time I focus on Scola, he leaves me wondering why he does not get more playing time. He seems to have an antidote for a team currently 22nd in offensive efficiency. He can shoot, post up and create his own shot -- with crafty moves and superb timing on his counter-spin (both off the dribble and on the blocks).

I guess Rick Adelman really, really does not like rookies. Even the non-traditional ones. Hey, Ricky - were you not aware that Luis is an international basketball star? He's kinda good and stuff. He even helped his country win some medals. Things LeBron and D-Wade have had trouble doing. If SportsCenter worthy highlights are what you need to be impressed, Scola can deliver: 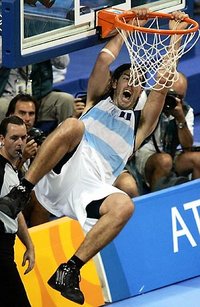 When the season started and we opened against the Kobes, I was okay with Luis not starting. I understood he needed to be slowly introduced to the NBA game. And that Chuck might have issues being productive coming off the bench. But we're now almost 30 games into the season, and we're not exactly making a positive playoff push. The worst was on Monday when Scola was killing (and I mean killing) Golden State with rebounds, shooting and hustle plays. Yet when the fourth quarter saw the Rockets choking away an 11 point lead -- Scola was nowhere to be found. Why??!?! Scola has the prettiest looking shot on the Rockets for all players shorter than 7'5" - we need to start taking advantage of this. I mean... have you seen Chuck Hayes try to shoot? It is cringe-worthy.