Share All sharing options for: Hey, Chuck, Coach wants to see you

Rockets beat Seattle 96-89. Yao leads the way with 30 points and 17 rebounds. Oh, and 4 blocks, too. Cause he's beastly like that. Tracy hobbled along to 17 points 6 rebounds and 5 assists - a pretty strong showing for a guy who is clearly still hurting. I'll be nice and not talk about how he's going to be abused on defense by all upcoming opponents. And Carl Landry kicked ass. Once again. 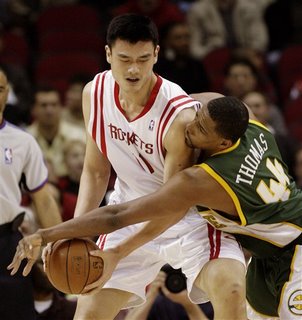 Oh, Yao - this is where you use your elbow and teach Kurt Thomas a lesson. He went to TCU, and is a dirty Horned Frog, so elbows to the nose are well deserved. Pleasantries aside...

This should be the locker room conversation right now:

[random assistant coach] Hey! Hayes -- Coach Adelman would like to see you in his office! He says it is important!

[Rick Adelman] Chuck, have a seat.

[Chuck] Nope, I was busy reading over my shoe contract with the company in China.

[Ricky] You have a shoe contract? Holy shit. Anyway, Landry had 12 points, 2 rebounds a steal and a block in only 14 minutes of action. It's his fourth really productive game in a row.

[Chuck] You let a rookie play?

[Ricky] Silence! Anyway, how many points did you score today, Chuck?

[Chuck] Hold on, let me count (starts gyrating wildly in a counting motion using his fingers/toes)...

[Ricky] Uhhh, Chuck - let me save you some time. The answer is zero. You didn't score.

[Chuck] Hey, but the European dude didn't score, either!

[Ricky] Chuck, Luis Scola is not European. He's from Argentina. Though he did play professional basketball for Spain for 10 years. He probably has a shoe contract, too. Oh, and he's a legitimate 6'10" while you are shorter than Charles Barkley. He can score points, too, if we need. He's actually shooting 50% from the floor. And it's not all layups and putbacks - he can actually shoot. Kinda like Yao.

[Ricky] My point is this... have you learned how to shoot yet?

[Chuck] No, but I never could.

[Ricky] Have you learned how to catch a pass yet?

[Chuck] Hey, that's not fair! I have Rafer and Luther trying to throw passes to me! You try catching their passes that somehow don't end up in the other team's hands!

[Ricky] Okay, that's a good point. Nevertheless... Chuck... I'm going to have to bench you for now. Luis has earned the right to be the starter. And Landry has clearly earned the right to significant playing time. That's two players earning time at the power forward position.

[Ricky] Keep Franchise and Mike James entertained during games. Dikembe might be running out of material by now. And Novak has *no* comedic timing. It's all on you. Anyway, that's all I got, Chuck. Thanks for understanding. Could you send Rafer and Luther in? And tell them to bring their playbooks?
_______