I have foreseen your destiny!

Share All sharing options for: I have foreseen your destiny! 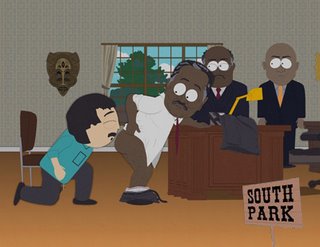 You cannot stop Yao. You can only hope to contain him. Or foul the shit out of him. But he shoots 90% from the line, so that doesn't work either. Isiah saw it coming, so he left the show early. Guess he doesn't like predictable endings. (and you can be sure I will post the YouTube clip of Yao gorilla dunking on Malik Rose's corpse as soon as it's online.)

Ohhhhh! And that's 4 in a row! Just as I called it a week ago. The "east coast swing" is a nice way to pick up cheap Ws.

I told you Scola should be playing more! He was the difference in the game and negated the impact of David Lee completely.

Rafer... I gotta hand it to you. You played great in the 1st quarter. Tried everything you could to fuck it up in the third quarter (heaving 3s when Yao is killing inside is just stupid). Then you made up for it and closed out the game in the 4th with some tough defense, great passing and an actual made layup in traffic. I expect more of this from you. We can compete against anyone if you play like this.

Where the F was Aaron Brooks in the 2nd half? He killed the Knicks last time.

Bonzi? F-U. You are the reason the Rockets went from 12 up to 5 down. Nearly giving me a heart attack in the process. At least fake it like you want to play defense every now and then. You made Eddy Curry look energetic.

Shane Battier -- another solid, unsung performance that was essential to another victory. This is why we made the Rudy Gay trade. Rockets fans, always remember this.

And to the rest of the Rockets - when the 7'5" Chinese dude in the middle is scoring at will against an opponent that doesn't seem to care -- if you don't make sure he at least touches the ball on every freakin' possession -- you should all be benched. Yao could have scored 50 tonight if anyone was paying attention. I'll take the win, sure, but let's make it easy next time. Here's what he looks like. It should be easy to find him. 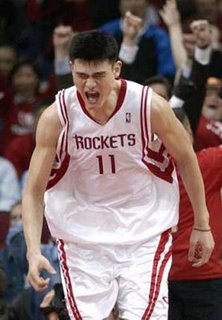 Go Rockets! Make it five for five on Friday! I'll be there!