Share All sharing options for: I'll take a few please

I'm still ignoring last nights frustrating game for the most part, but I might find less anger later and post about it.

A few things were apparent last night. Yao has to be the focal point of the offense and when he is, the rest of the guys have less room for stupid shots.

So, I was checking out TrueHoop this morning and it contained a link to a Washington Times Article.

In it was this excerpt:

SEEN AND HEARD
In addition to a rigorous offseason training program, Wizards forward Caron Butler attributed his career-high 21.5 points and .481 shooting percentage to the work of shooting coach Dave Hopla, who joined Washington's coaching staff this season.
One of the elements of Hopla's expertise is shot charting, which is new to Butler and his teammates. It allows a player to see the spots on the floor from which he's shooting well — or poorly.
"It lets me know what I need to work on," Butler said. "And with the percentage now, I know from the floor, I'm shooting like 80 [percent] from 16 on in. It gives me confidence. I can come to a spot on the floor and know it's a good shot. I can be like 'Coach, I'm shooting 80! It was a good shot!' "

To which I have to say: 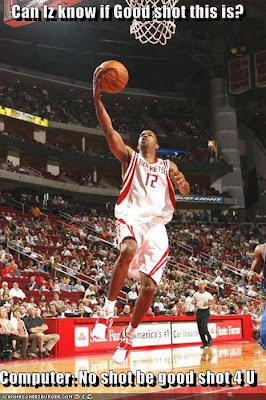 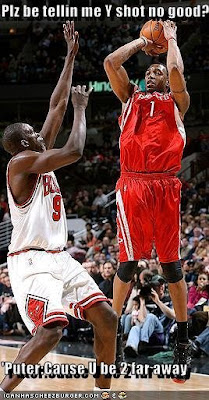