Lee forwarded me an awesome interview/article on Yao Ming after the Philly game debacle.

For the first time in his entire career, Yao Ming left the arena and refused to talk to the media after the game. This was certainly understandable given that the Rockets blew a 16 point lead and the additional fact that Yao's teammates Rafer and Luther combined to shoot the ball 26 more times than Yao did. 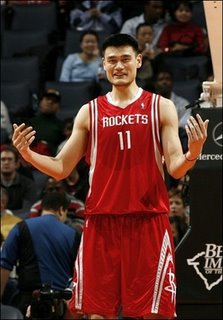 But after a night to reflect on a bad loss, Yao proved why he's the F'n man:

TITAN Sports: Right after the game last evening, why did you leave without taking the post-game press conference/interview? This is the very first time that such thing happened ever since you came to NBA.

Yao Ming: I really don’t know what else I can say. I was feeling very very angry and at the same time quite melancholy; so I just took my bath and left. Moreover, I knew, if I did attend the press conference/interview last evening, all I would have said would definitely be angry words. I don’t want to become angry or mad again. Such temper tantrum won’t help to solve problems. I have told you earlier that I have said what I should have said already.

Granted, this here blog has long been a proponent of Yao getting angry and playing angry. But he has a point. Temper tantrums do not solve anything (unless it ends with Rafer injured). Yao is a better man than me - I'd have been cussing and complaining and chewing out everyone in a post-game conference. He knew that he could not put himself in that position, so he chose not to allow for that opportunity. Smart man.

TITAN Sports: So the key is which particular position that had not played well?

Yao Ming: Every one of us; we all have issues/problems. (When I said) every one of us, it also included me. We are a collective. When we win, it is the Rockets who win; it is not someone has won. When the Rockets lose, we lose as a team. We have not played well at all.

TITAN Sports: So who should bear the responsibility for this defeat?

Yao Ming: Of course, it is on me. Since I want to step up to lead this team, naturally, I should bear the responsibility. I felt very sad and uncomfortable about the loss, but we need to look and move forward. We just cannot always live in the shadow of defeats and the past.

Now *that* is a leader. While Rafer tries to spread blame around when he fucks up a game, Yao takes responsibility for losses - even when they are clearly not his fault in any way, shape or form. T-Mac is also to be credited for having the same attitude - the difference is that Game 7 last year kinda really was T-Mac's fault.

I've stated before that we have to re-adjust our expectations for this season. We have to be patient. To overcome Rafer's shittiness and Luther's cowardice, it is going to take time to learn Ricky's motion offense, get T-Mac back to good health and also figure out the best way to use Scola, Brooks and Landry. The Rockets are not going to be a team anyone wants to play after the All-Star break. Yao sort of seems to agree:

TITAN Sports: You also added that the Rockets is like a sinking ship with a big hole in the hull. Is the situation of the Rockets that serious and worse as you described?

Yao Ming: How severe or dangerous the Rockets is has to be completely decided by us. If we play as hard as we can, we can turn the situation around…..or else…………….I believe we can turn it around.

Time to show the Durants while a playoff team looks like.