Rockets down 50-42 at the half. Rockets decide enough is enough (that means you and your turnovers, Rafer) and hold Portland to all of 29 points in the second half. Behind Carl Landry, Luis Scola and Aaron Brooks, the Rockets lock down Brandon Roy and the Trailblazers and win 89-79.

Yao Ming got five bullshit fouls called on him... but fortunately his fourth Q services were not needed this time. 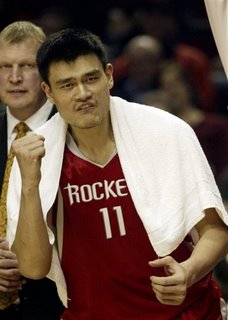 Lee and I will probably tackle the "how shitty are NBA refs" issue sometime this week - as that is four games in a row where phantom fouls almost hurt the Rockets (specifically Yao and Landry). Hell, Luis Scola got tackled on a rebound when he had position -- and they called a foul on HIM!

Best part of last night's game? The fact that it seems that Ricky read everything I wrote the last two weeks and took every single piece of my advice. Really:

Rafer had another beauty of a game last night. 3 of 8 from the field, 9 points, 1 assist and a whopping 5 turnovers (including 4 turnovers in 6 possessions in the third quarter - impressive!). Enter Aaron Brooks - and the Rockets quickly took control of the game. 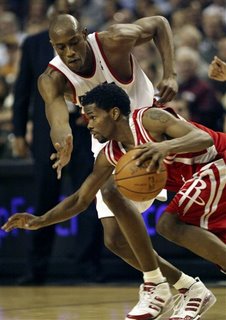 The way the Rockets just shut down Portland reminded me very, very much of last year's team. The non-Game 7 collapsing version I mean. And also using three rookies in crunch-time. I was highly, highly impressed [and pumping my fist after nearly every play, instead of throwing things at my TV for once]. It's like JVG came back and gave a pre-game pep talk!

Hell, even Richard Justice took time away from slurping Bud Selig and giving Brett Favre the reach-around to congratulate the Rockets and the rooks.

All in all, it was quite the enjoyable Friday night in front of the TV!