Share All sharing options for: Rookies Unite! And Refs suck

Dave did a pretty good recap of the game, but I wanted to give some props to all three of our rookies. Each was huge reason for the win last night. I'm enjoying how Coach is playing whoever has the hot hand/ sitting whoever is obviously sucking late in the game.
I want to take some time out to say this: NBA referees suck complete ass. These guys last night made mistakes that I wouldn't have allowed from my Intramural Referees I taught in college. Falling for obvious flops? Check. Making calls you did not see just because "something happened"? Check. If all else fails and you don't know who did it call the foul on the the active and/or youngest guy? Check. If the shot doesn't go in, it had to be a foul right? Check. If a guy makes a move you don't believe is possible even if everything is done right you have to call traveling? Check.
Yao had 5 fouls called on him last night, no reasonable person could look at the replay (or live for that matter on TV) and have said 4 of the called fouls were actual fouls. Two of the calls were so bad that Yao had to be pulled from the game to get him to stop yelling at the referees. Yes, Yao yelled at the refs last night, that's how poor a job they did.
And before someone tries to call me out for sour grapes, the guys last night sucked for both teams, there were some horrendous calls called against both teams. There were more called against the Rockets, but there were plenty of times I saw bad calls against the Trailblazers. I guarantee there are some Trailblazers fans out there saying they got fucked. So all this added up to me having to figure out what is going on and here is what I found on Covers.com, a breakdown of how the guys did against the spread and how home teams and away teams fared under their watch. 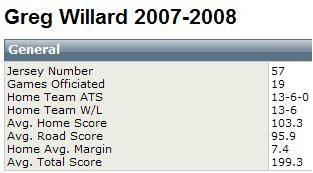 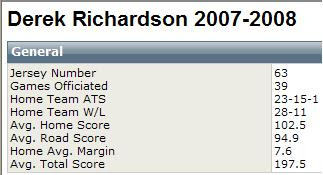 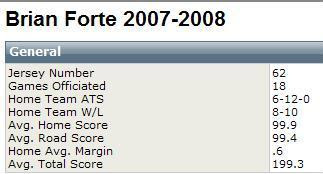 So here's why there were a lot of shitty calls on the Trailblazers as well. Forte is decidedly against the home team, 6-12 against the spread and 8-10 overall Win/Loss record for the home team. Somehow that actually works out in favor of the home team a little bit in the average scoring margin.

What's my conclusion here? NBA referees either need rules changed that will help them call the game or need some more training. Of course with shitty referees like Bennett Salvatore out there I'm not sure who is going to train them. So what rules would help?

1. Get rid of the insanely idiotic circle, it helps no one and makes referees have to call something incorrectly just because there is a line on the ground. I cannot count how many times a referee has been about to call a correct charge call and then have to call a block because they looked down and saw a guy who played defense perfectly inside the line. And, since the whistle was blown they had to call something. Get rid of it.

2. Get rid of defensive three seconds. That is not basketball, that is made up bullshit. Either allow the zone or don't allow the zone. All defensive three seconds does is make the referee look for yet another thing when they should be watching the action of the actual game. Plus if someone wants to stand in the middle they are being dumb, there is no advantage to it past being able to move a little less.

3. Rid the game of flopping. There are two ways to do this. A. Whoever initiates the contact is the fouler, that's about as basic as it gets B. After each and every game the league needs to fine players, even to the level of suspension to eliminate flops. That will keep guys on their feet, and it will help protect the players because bodies won't be flying in the same way. How will the NBA know if a guy flopped? Common sense, it's all there in the video and the body language, they just need to use their judgement.

There is absolutely no reason why these rules changes can't be made going into next season. I will be writing a letter to the NBA offices before the season is up. How much good will it do? Probably none, but I won't know until I give it a shot.

Any other rules that anyone else wants fixed?