The Rockets play the Knicks tonight at 6:30 CST in Madison Square Garden, even though it is not in Madison Square, on Madison (St, Ln, Ave, or Blvd), actually square OR a Garden. And since that hasn't been the case since the 20s, I have no idea why the name stuck. I guess it's like a lot of things, why not? Now it's a cultural icon, though there has been talk that the new MSG will be the Farlay Garden due to it's proposed location near the James Farlay Post Office. I say, keep the name the same, you've gone this long, it's tradition now. 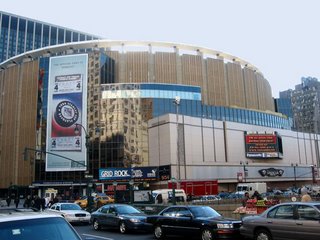 This is game two of a riveting two game series between the Rockets and Knicks. With game 1 ending in a resounding 103-91 victory for the Rockets on Saturday night. Yao had 30, and Eddy Curry tried to keep up, but since he sucks, he couldn't.

Rockets: It's Yao, even with Tracy not injured, it's Yao. He does have trouble with the back to backs occasionally though, so he might only get 28 and 10 tonight.

Knicks: I think it's David Lee, but you'd never know it because Isiah Thomas traded for Zach "Waste of Space" Randolph in the off-season. Another stellar choice there tiger, way to make another team in the West good.

I will give Zach some credit though, he pulled down 22 rebounds in the last game. The problem? I had ABSOLUTELY NO IDEA that he did until I checked the box scores of his last few games. And I watched the game from beginning to end Saturday. He also missed 12 shots so I'm not sure how many of those rebounds he got the old fashioned way (missing on purpose). Does he have a rebounds clause in his contract like this guy? 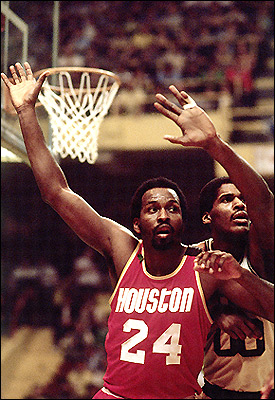 This win will complete Dave's 4 game prediction and get one game closer to mine of 5.


We'll be on hand for that 5th win and in case you don't have plans for Friday night, the Rockets are doing a guy's night out again. 2 tickets, 2 beers, 2 dogs and 2 pint glasses, starting at $56 bucks and that's a discount on the regular price. I got two $40 seats for $36 each, and you get the food and drinks thrown in. Pretty damn good deal. I plan on going to all of these this year if the wife will let me. I still remember when you could get that top row at the Summit for $10 bucks, or $5 on some nights, damn, those were the days. I'm glad I'm an adult now and not a kid trying to get to a game.


Just FYI they also had a half off discount for the 1/29 game against the Warriors at the box office. But I'll save you the trouble of getting your own. Just go to Rockets.com and use promo code: THANKS0129