Not only is Luis Scola now a starter for the Rockets...

but he's also been named to the T-Mobile Rookie Challenge and Youth Jam "Rookie" team!

(I think the true challenge is just saying the full name of the sponsor for the game.) 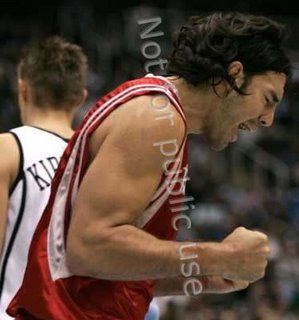 Scola seems very excited to be honored in this way...

of course, I don't expect Scola to do much in the game itself other than grab a few rebounds, throw a few elbows and maybe start a skirmish or two. Scoring points? Unlikely - for the odds of Durant actually passing the ball are non-existent.

Oh, and Aaron Brooks got hosed in the selection process.