Share All sharing options for: Song dedication to Tracy McGrady

I got to work this morning, only to see this link with some not-so-nice rumors about Tracy McGrady and his new attitude (from The Detroit News):
____________

Half-hearted?
The topic of Tracy McGrady came up in the Pistons' locker room before a game last week. McGrady is now injured and unhappy in Houston. Reports there say he has told friends he wants to be traded -- again. One player, who shall remain nameless, joked that McGrady was becoming more and more like his cousin, Vince Carter. "They should call Tracy, 'half-man, half a season,'" the player cracked.
____________ 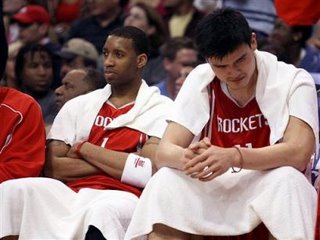 Half-man, half-a-season? Ouch. Though, not completely uncalled for. And you know, the injury history doesn't really bother me so much. I have had problems with a bad back. You can't ignore that kind of injury. You can work around it, but it's always there.

McGrady's attitude towards everything when he's "down" a little bit is what bothers me. He sulks and whines - and it shows on his face. This has to rub off on his teammates (okay, not Yao). It certainly affects how McGrady plays in games... when he's bummed out, he's far less likely to drive the ball to the basket (check that -- even less likely than usual).

And, with regard to long-term issues, this is now the third team McGrady has played for. I understand him wanting to leave Toronto. With Isiah there... and his cousin being the unquestioned "star" - it's natural for T-Mac to want to go elsewhere. When he got to Orlando and developed into that 1st Team All-NBA performer... he had the world in the palm of his hands. Then he started blowing 3-1 playoff leads. Then he started sulking. Then he made ambiguous statements that were interpreted as trade demands. He eventually got traded to Houston. I ignored what happened at the time. Sadly, history appears to be repeating itself again. Another blown playoff lead followed by a disappointing season and some injury problems, along with more rumors of a trade request/demand/wish.

In honor of this, Tracy, I would like to dedicate the following song to you. It's an oldie, but a goodie. It's "Happy Face" by the Toadies (okay, so it never got airplay on the radio - so what?). I think the lyrics are quite appropriate given the situation today, as it covers both of our emotional states. See for yourself: 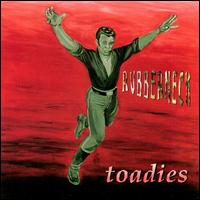 What's the point of my song dedication? Well, I think it's pretty clear. You and I are both not happy with how things are going, Tracy. But I'm sick of your whining and lack of leadership. Quit trying to beg out of a tough situation. You're only going to appreciate winning when you have to struggle to get there. Hakeem had the same problem in 1992. But we didn't trade him, and it's unlikely that we'll trade you. And the "here we go again" part? Well, that's me recognizing that you've tried to pull this stunt before. I'm no longer falling for it.

So, essentially, quit your bitching. Quit sulking. Quit talking about how bad things are. Go develop that killer instinct and win some freakin' basketball games. Maybe even a playoff series or two? Just don't pass the ball to Rafer when he's supposedly open. Trust me on that.