Neither Lee nor I have really recovered from Tuesday's debacle. It's taking all of my strength not to completely freak out and give up on the Rockets. 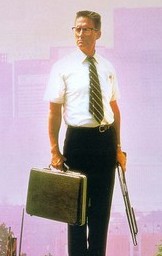 Then I remind myself of the situation. We were playing good, team basketball - even without our supposed leader and best player - and at one point surged to 20-17. Winning five in a row. I'm doing my best not to be too myopic in my emotional outlook on the season. Besides, we do have some definite bright spots we can focus on: 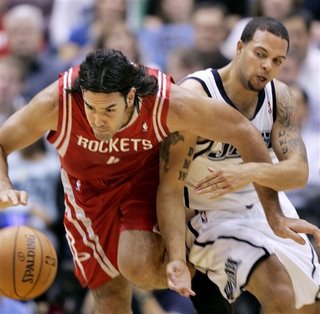 Our 27 year old foreign rookie is really starting to find his groove in the NBA. 8 points, 5 rebounds, 52% shooting and a hell of a lot of hustle every game. Ricky even has him on the court to close out the games instead of Chuck Hayes now. Scola almost single-handedly kept the Rockets from choking on Tuesday. (Unfortunately he was no match for the natural disaster that is Rafer Alston.)

I am even the proud owner of a Rockets/Scola #4 jersey that I bought at the game during halftime Tuesday. Practically the only good thing to come from that whole evening! 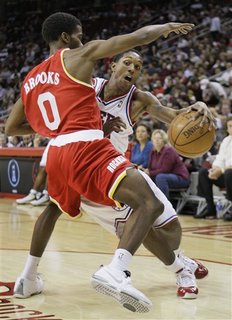 Granted, when the Rockets drafted Chris Rock's little brother, I was annoyed. I thought Glenn Davis was a better choice for us (not knowing we'd get Scola). I thought drafting a midget in round 1 was a wasted pick. I was wrong.

Aaron Brooks is Iverson-quick. He willingly plays defense (though he's still learning how to do it at the NBA level). He makes really good passes in traffic. He can score when Yao is being triple teamed. He knows not to give the ball to Luther Head when the shot clock is running down.

Yes, he's a true rookie, which is why he's not starting (and hopefully the only reason we still have Rafer on the payroll). But Brooks' quick growth puts me at ease and will only accelerate Daryl Morey's decision to hit the eject button on Rafer when the season ends. Since we are not winning a ring this year - I can rest comfortably knowing we at least have one competent point guard on the roster who will only get better by next year.

Yeah, the tall guy is still on the roster. Not that Rafer or Luther are aware of this. 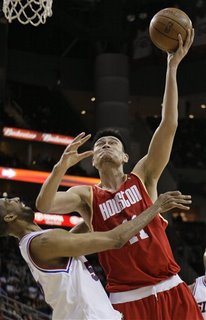 One day he's actually going to get mad enough to hit Calvin Booth with that elbow. Then the days of hack-a-Yao-with-impunity will hopefully be over. Yao's elbows have to be even pointier than Dikembe's - it has to hurt like hell if you get clipped with it. Yao needs to take advantage of this.

Anyway, T-Mac returns Saturday supposedly. Spurs come to town. We better not need 13 points in 30 seconds. Let's just keep a lead this time for the whole game. Is that asking too much?