So, I was perusing the Chronicle and the blogosphere looking for material this morning. Stumbled upon this between cups of coffee:

"During his respite from the Rockets due to a knee injury, Tracy McGrady has been enjoying the comedy stylings of NBA writers and bloggers. Quite entertaining."

Allow me to repeat... "Tracy McGrady has been enjoying the comedy stylings of NBA writers and bloggers." Does T-Mac read the Dream Shake!?!? If not, he should! But anyway, I really do hope that T-Mac is entertained by the recent rumors and rants and online criticism. I really do hope that he can come back and be happy and share a laugh or two with Yao again. 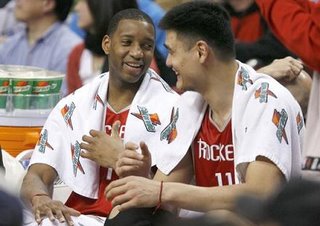 In short, we need you back, T-Mac. Yet at the same time, if you are going to be the surly, whiny, "let's slow it down and take fadeaway jumpers" T-Mac we've seen in '07, I reserve the right to retract the previous sentence.

Let it be said that we never bought into the Marbury speculation. As bad as Rafer is, Stephon would be the NBA equivalent of introducing a cyanide pill into the locker room. Ben Wallace is still competing with Shaun Alexander to see who was a worse big-bucks signing from two years ago (Alexander is winning that race, but only slightly). No chance in hell Daryl Morey brings in either guy for T-Mac.

But there are things we cannot overlook:

1. The Rockets *are* playing better without McGrady right now than they did the previous two months. The motion offense is working, multiple players are contributing (even Rafer!) and everyone seems happy to be involved.

2. If T-Mac buys into Ricky's motion offense now that he's seen it can work -- the Rockets can only get better. Of course, this is still a big "if" for T-Mac. Scola and Aaron Brooks are playing great. Even Carl Landry had a huge game on Friday. (Bonzi is the only player playing worse right now.) Does T-Mac take away opportunties from these other guys when he returns?

There are also things I certainly do not believe:

... none of the trade rumors are coming from within. General manager Daryl Morey hasn't fielded any phone calls about McGrady and certainly hasn't made any.

If that is the case, Morey is not doing his job. He should constantly be attempting to upgrade the team. McGrady is a 28 year old, injury prone, perimeter player. Yes, he's in a class with maybe 3 other players (Kobe, LeBron, D-Wade), but if we can improve the team, you have to keep your ears open to potential trades. No one is untradeable. Not even Yao.

McGrady squelched any thoughts he is starting them. "There was a rumor that I said I was unhappy here and I wanted to go to Chicago and I never said anything about Chicago, or anything about being traded," McGrady said. "This happens when teams are trying to make deals and they throw names in there. It is what it is."

I find this hard to believe as well. I've been carefully watching McGrady's body language. He was miserable all throughout December. I'm sure he's at least *thought* about being traded. I'm sure he's talked to other players about what they have heard. I do not doubt McGrady when he says he wants to stay here, but I am also not naive enough to believe that he hasn't considered other options. Fortunately he's not his cousin, so I don't have to worry about him tanking games.

T-Mac is scheduled to return on Saturday to face the Spurs. Which version do we get? Hopefully one that gets the Rockets to 22-18 (yes, I am already penciling in a victory against Philly tomorrow night). Oh, and FYI - Lee and I will be at tomorrow's game. Go Rockets!