That is not the formula for success

Share All sharing options for: That is not the formula for success

Thank God it is 2008 - for 2007 could not have been more disappointing and frustrating if you were a member of the Houston Rockets.

Monday night's effort and result was a metaphor for the entire season to date. Start strong, look impressive... then go limp and lose to Golden State.

In the process, we may have stumbled upon an anti-formula. Whereas the formula for success is simple: play inside-out, feed the Big Man, and then make open 3s... the Rockets tried a new formula Monday night. Let's break it down:

For those without math degrees, Rafer shot more than twice as much as Yao. Brilliant! 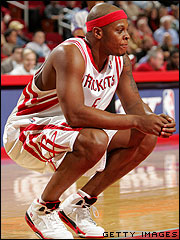 5. Go up by 11 points in the third quarter and immediately declare victory. And by "declare victory" I mean stop playing defense, stop passing the ball, stop trying to take the ball to the basket and stop rebounding. Then again, the Rockets made no effort to rebound all night. Out-rebounded 47-34 by Golden State. Ouch.

Of course, there is an easier way to explain how/why the Rockets lost Monday:

When Rafer Alston is named "Player of the Game" by Bill and Clyde... you're pretty fucked. 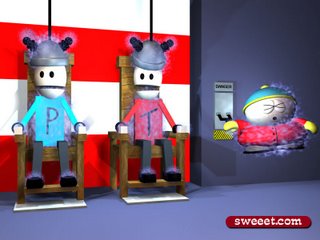