Rockets versus Magic, it's FANNNNTASTIC

Share All sharing options for: Rockets versus Magic, it's FANNNNTASTIC

Tonight at 6 Post Meridiem Central Standard Time… wait, now I get why we just say 6 PM CST, that’s a lot easier. Anyway, at 6 PM CST tonight the Houston Rockets will take on the Orlando Magic. This could be a big game. It is a chance to go 3-1 with Tracy out and a win against a good team; which we haven’t had in a while. And what does the outcome of this game hinge on?

Everyone but Yao hitting the open shot that he provides

The problem with that for me? That’s not the sexy answer!! I want it to hinge on Yao versus D-Ho. So we’re going to pretend like it does!

Let’s get a few things out of the way:
1. Yao is a bad ass
2. Dwight is a bad ass
3. They can both be bad asses equally, one doesn’t have to win
4. Yao plays for my Rockets and sorry Dwight, that makes him better on principle alone

Let’s analyze a few of these:

Edges to Howard:
Minutes Played 35.9 to 32.2: That’s a big stat, but not a huge difference. Some of this has to do with a few of Yao’s injuries having to be taken slowly on the recovery. But still, it’s a testament to Dwight’s conditioning. He’s actually up to 39 minutes a game this year and Yao up to 37, those are big numbers for centers

Field Goal % .562 to .518: .562 is a spectacular number. And that’s actually being brought down by his first two years, he’s shooting better than 60% the last two years. He’s good around the basket and his strength allows him great positioning. Yao isn’t exactly a slouch, especially considering he takes a lot of jumpers and hook shots that Howard does not have the range for.

Rebounds Per 12.1 to 9.1: What can I say? Other than that he’s the best rebounder in the game in my eyes. Yao’s at number 8 this year, that’s really good as well.

Edges to Yao:
Points Per 18.8 to 16: This stat is skewed a bit by 2 things 1. Yao has more years 2. Yao plays with another superstar; they cancel each other out in my mind, so edge to Yao.

Blocks Per 1.9 to 1.8: Both have done a great job at becoming true shot blockers. But the stat is the stat, Yao is the winner at blocks

Turnovers Per 2.6 to 2.9: This one is amazingly in Yao’s favor. Well not amazing to me, but amazing to those that think he’s soft and clumsy. He’s not, and there you go, his turnover ratio is better than Howard’s so suck it haters.

Free Throw % .826 to .606: Yao is better than most centers in the history of the known universe, so this isn’t a surprise. Now we just need the referees of the NBA to realize that Yao indeed does get fouled. Oh, and that he can play good defense and to stop calling bullshit fouls on him.

Your winner! Yao Ming, look at those guns! 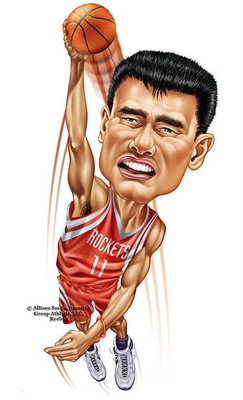 And my prediction for the game tonight? PAIN! 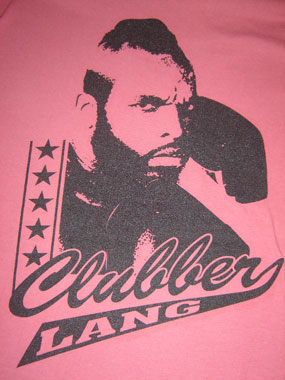