The Rockets found themselves down by 20 in the first half yesterday and they could have given up. They could have, but they didn't. As Dave said, there are no moral victories. There are building blocks in a long season though, and this is one of them. The Rockets now know that they can play without TMac if they play as a team, that's invaluable.


What did I like about the game? Aaron Brooks running the offense AND playing some good defense, Luis Scola's hustle even though he was getting screwed by not being on the floor more, and second half monster dunking Yao. I also like the fight in the team as a whole, and yes, even Towelie had some fight in him last night. They fed Yao relentlessly.


What didn't I like? Unfortunately Rafer also had some pathetic turnovers, including one that was probably given to Head, but was because Rafer passed him the ball and then ran right into him. The Rockets letting the Celtics get a 20 point lead. And I say letting because they had plenty of open looks, everyone was just taking paint chips off the rim during that period of the game. First half Yao's shooting was truly awful, I don't know what was up but he was certainly not in the same country as his shooting touch. Luckily it got FedEx'd same day for the second half.


The worst part of the game was the officiating. I rarely hear Bill Worrell or Clyde or AirBullard call out the officials, but it was relentless in the second half. Bill even called Bill Spooner out by name. I'm not sure how fining works, but if announcers can be fined, he will be getting a nice present from the league. The problem with that fine? Bill is right, Spooner seemed to have a personal vendetta with Yao like Dick Bavetta used to have with this site's namesake. It was pathetic, and Yao kept cool somehow, simply choosing to release his anger on the rim with three crazy gorilla dunks, one on Garnett's head. 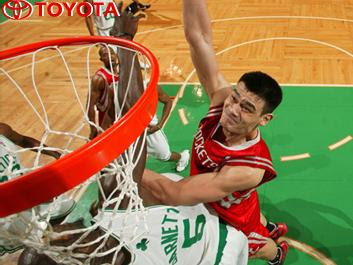 I am encouraged over all by the game, a little more proper Yao officiating, and a little less rim clanking in the first half and it might have gone our way. We get a rematch at home on March 18th. And I agree with Dave, we're going on a 4 game winning streak starting tomorrow night. I'm saying Yao puts up 32 and 15 with 2 blocks and 4 assists on Friday.