Who is in? Who is out? I'm seeing rotation!

Share All sharing options for: Who is in? Who is out? I'm seeing rotation!

To start with... bad news. McGrady may be delaying his return. Again. Apparently he had a "rough" practice or something? What gives - did someone ask him to try to make a layup? 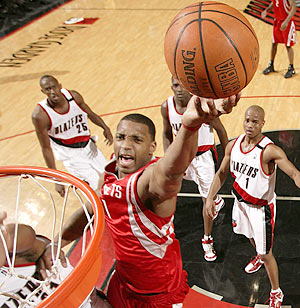 So, it looks like the Rockets will take on the Spurs sans T-Mac. Maybe he's waiting for the team's record without him to drop below .500 again before he returns in the "hero" role.

This got me thinking though. And yes, such action can be dangerous, and highly unproductive. When T- Mac does eventually hobble back onto the court, what should the Rockets' rotation be? Clearly, we have an abundance of guards and backup forwards that are going to re-adjust to T-Mac being back. Who sits and who plays? Or, rather, who should sit... and who should play? Considering that Ricky is the coach, the answers to who will and who should are completely different. 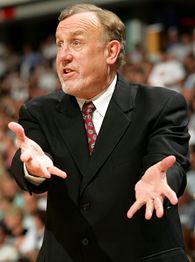 This is what the Rockets' starting lineup *will* be:

The obvious response is "hey, that's what the lineup was before - and it clearly was not working!" This response would be correct. But Adelman doesn't have time for your impeccable logic.

Who will fill out the rotation?

Most likely we'll see Bonzi or Scola be the first off the bench. No matter how listless Bonzi has played over the last month. Scola is probably angry he's not starting - and he has a legitimate complaint. But Chuck Hayes would lose all value if we brought him off the bench - Chuck would never be able to matchup against quick/shoot-first bench players. And that might cost him his shoe deal in China. We can't have that. So Scola will play the backup PF and C roles - and he'll do it admirably, dammit!

After that, certainly Aaron Brooks has earned legit playing time. So we'll see him for 15-20 minutes a game. Luther Head has played scared the last 10 days, but he's the only consistent outside shooter we have right now. He plays, too. Just hopefully not in the 4th Q.

That's 9 in the rotation. Stevie and Mike James will just have to accept their role as Dikembe's audience for sideline standup routines.

Now, that doesn't solve the mystery of the Rockets season. It couldn't. T-Mac cannot make Rafer look competent. T-Mac can't magically teach Chuck how to catch or pass or shoot. t-Mac won't stop shooting fadeaway 3s either, this much I know. Change has to be made somewhere, right? Right?

Here's what the lineup SHOULD be:

Why the change? Look, Hollinger was wrong. The Rockets are not winning 60 games or the Championship this year. Hell, they'll be lucky to sneak in as the 8th seed (which they will do, but that's for another column). Why not get Brooks and Scola prepared to go to battle for the '08/'09 season? It would create all sorts of interesting possibilities:

1st off the bench:

Bonzi (I keep telling myself he'll get in shape and start to care. I'm becoming more wrong each day, but....). This could also be Luther Head or Rafer (until we trade/cut his ass).

Also off the bench:

Now *this* is key. Scola can't play the whole game. Neither can Yao. But Chuck is too short to play the C position, even though I am aware Ricky tries to get away with it right now. No - instead we gotta give playing time to Carl Landry. He appeared in 3 games last week - each time showing hustle, athleticism and a very solid sense of rebounding and positional defense. Then he'd be ushered back to the bench after 8 minutes, never to be heard from again. I cannot figure out the reasons why. Maybe he made a pass at Adelman's wife... who knows? Landry has to play though. He needs 10-15 minutes a game. Otherwise, just send him to the D-League.

That would leave a regular rotation of Yao, T-Mac, Battier, Scola, Brooks, Bonzi, Head, Rafer and Landry - a solid 9 deep rotation. And Francis, James, Chuck and Kirk Snyder can battle them in practice to keep them sharp.

The purpose of this is that we could conserve a lot of energy from our starters in the late 3rd/early 4th, and then bring back Scola and Brooks to be the energy guys to play off Yao and T-Mac to close out games. Why Ricky won't let Yao and Scola play at the same time baffles me right now - it's not like they are Eddy Curry and Zach Randolph - they won't get in each other's way. PLAY SCOLA! More than 20 minutes!!

Besides, when is the last time you saw Bonzi, Rafer, Chuck or Luther Head dive for a rebound like this: 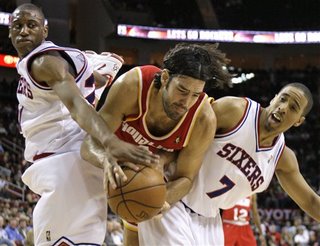 That's hustle. We need more of it. Go Rockets!