Without Choke City, there is no Clutch City

Share All sharing options for: Without Choke City, there is no Clutch City

It was fifteen years ago. The Houston Oilers set the standard for embarrassment in professional sports. The Oilers, led by future Hall of Fame QB Warren Moon (and the prolific run-and-shoot offense) took on the hated rival Buffalo Bills. The Bills were usually led by Jim Kelly, but not this time - Frank Reich was in at QB due to an injury to Kelly. 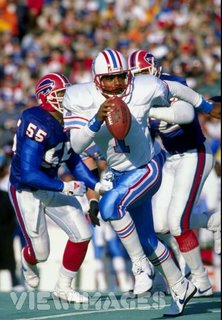 And yet I'll never forget the halftime interview of Bill Cowher by Bob Costas. Pittsburgh was set to play the winner of the Oilers/Bills game, and Costas asked Cowher if he was already preparing to play the Houston Oilers due to the "insurmountable" halftime lead.

That smug midget jinxed us.

The Oilers took the field in the 2nd half ready for blood. And on the Bills' first pass of the half, Bubba McDowell took Frank Reich's errant pass all the way to house for a TD. The score:

There was no way we could lose this game. Check that...

Offensive Coordinator Kevin Gilbride (douchebag #1 - ask Buddy Ryan) and Defensive Coordinator Jim Eddy (#2) then decided to go into a wussified conservative offense along with a prevent defense. As everyone at home knows, but apparently no NFL coach knows - the prevent defense only prevents you from winning. The Oilers went into a lock-down mode playing not to lose instead of playing to win.

Next thing I know... the Bills run one in on a seemingly meaningless 1 yard TD. Then the Bills recover an onside kick.

Then Don Beebe runs OUT OF FUCKING BOUNDS... and catches a TD in the end zone. The ref was not paying attention to the guy 10 feet out of bounds who still caught the pass and did not throw a flag. 35-17 all of a sudden. Fuck.

By that point, my 15 year old head was spinning and next thing I know the Bills score on a TD pass to Andre Reed. And then another. All of a sudden it's 35-31. And on another Reed TD reception... the Bills somehow took the lead at 38-35.

Oilers somehow tie it up to force OT (thank you, Al Del Greco for delaying the inevitable.)

Early in the OT session, Moon attempts a third-down pass to Ernest Givens. But Givens was given the Woodland Critters treatment by the Buffalo defense. The gang-rape prevented him getting to the ball, and Moon's pass was picked off. Bills ball at the 20 yard line. Game fucking over.

Now, it goes without saying that this game sucked huge Donkey Balls. And at that point was the basis for the worst day of my entire life.

But, on the flip side... while the Oilers introduced us to the concept of Choke City -- without this game (and the Rockets collapse against Phoenix in Game 2 in 1994), there could never be a Clutch City. And I guess I should be thankful for that.