Share All sharing options for: Yao was fouled, dammit! Twice!!

A bit of a disclaimer this morning: I was at yesterday's game. At half-court. 10th row. Phenomenal seats. Only to watch the Rockets blow an 8 point fourth quarter lead. It just about killed me. Or had me ready to be fit with a straitjacket. I would have had a post-game review up yesterday, but I just couldn't do it. I wanted to, but...

Normally I am a rather rational and logical person. Except when it comes to the Rockets. My emotional balance runs parallel to their season - when they play good, solid team basketball, I'm a pretty content and reasonable person. When they start playing not to lose while also getting screwed over by the referees... I tend to become unstable and highly irrational.

Yesterday afternoon, I was so agitated after the Rockets game that I couldn't even properly enjoy the Cowboys choking against Elisha and the Giants!

Oh, and YAO WAS FOULED you sons of bitches! Fouled, I say! Twice!! 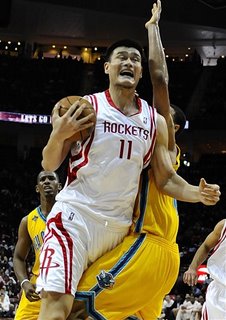 Look, I love Chris Paul's game. Maybe not as much as Lee, but I recognize greatness. And when matched up against Rafer, Chris Paul looks even better than normal. It was not fair. Then Ricky got smart and put Aaron Brooks into the game. The midget actually held his own and managed to stay in front of Paul... then Ricky put Rafer back in. (Oh, Brooks, while you played great, please stop taking so many 3s - it's not your shot. You were 1-5 this game. You should never shoot more then 2-3 of those a game. Ever.)

Rafer... 4-13 from the floor. Again. At what point does he realize that he's not making shots and should just stop? He missed 2 layups. He missed open 3s. He missed that "tearput" thing he calls a shot. Oh, and he failed to get back on D to stop Paul. Ugh.

Meanwhile, Yao had another beast of a game. 30 points, 16 rebounds. The 6 turnovers are bullshit because 3 of them were when he was hacked to pieces but the refs must have been busy watching the end of the Colts game. What the hell? Peyton lost and little brother Elisha won? I wonder how the post-game family conversation went. Oh.... of course.

Anyway, back to the Rockets game. This game is precisely why we probably should not trade T-Mac. If he were able to play the 4th Q, we probably do not blow the lead. We played soft and tight and stopped running, moving and passing the ball around. Predictably, the Chris Pauls came back and took the lead. (Though the play Byron Scott drew up at the end to get Paul the layup was very well done... I was impressed.)

Nevertheless, I can't change the result. The five game winning streak is over. Playing like a bunch of five-assed monkeys at the end of the game did not allow the number to be "6". 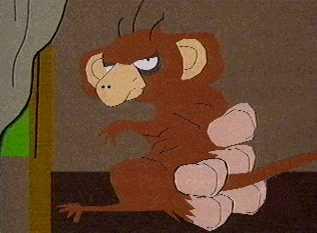 (oh, and on an unrelated note... Corey Brewer is a bad-ass, Lee. But, yes, he's skinnier than me, and that is not a good thing.)