I knew Carl Landry was like good and stuff, but...

Note to self - do not try to dunk or shoot on Carl Landry. He will hurt you. Even if you are an All Star. Ask David West. 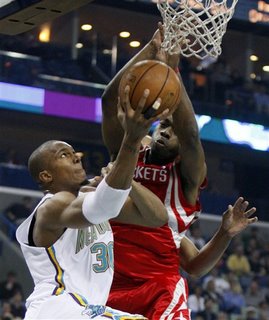 Mr. Landry (for all intents and purposes) was introduced to the NBA on January 11th. The Rockets beat down the Minnesota Timberwolves bad. And I mean really, really bad. Like we were Secretariat and Minnesota was everyone else at Belmont. So, Ricky decided to give Landry some run.

In those 20 minutes of action, all Carl did was score 15 points - without missing a shot - grab 11 rebounds (6 offensive) and serve notice to Chuck Hayes that his days are numbered and that Chuck might want to re-read the terms of his soon-to-expire Chinese shoe contract. Landry was here to stay.

(and, consequently, "Luis Landry" was born.)

Since that fateful day, the Rockets have lost exactly three games. Two because Landry didn't play enough, including the Philly debacle. And the third to Utah, which just so happened to be Carl's only "bad" game so far.

Wages for Wins says that Landry is the best shooting, scoring and rebounding rookie forward (per 48 minutes). Landry also leads in WinScore and WP48. And while I do have a degree in applied mathematics (surprise, surprise), I'm too lazy to break down the formulas today. Just go here.

While Kevin Durant is giving us consistent 7-21 performances (in losing efforts), Mr. Landry is giving a workmanlike 62% FG shooting, a PER of 22.71 - which leads all rookies. He's also Gorilla Dunking on anyone who gets in his way. [edit: Here we go!] Ask Cleveland for verification. For some reason his dunk isn't on YouTube yet. Durant will win the ROY probably, but he'll be watching Luis Landry play in May and hopefully June.

Now, if only I/we/someone could get Scola and Landry to actually make free throws, we'd be absolutely unstoppable. Two non-first round rookies. Having more of an impact than anyone taken in this year's 1st round? Daryl Morey is like a genius or something.