Don't Mess with the Commish (or Texas)

Share All sharing options for: Don't Mess with the Commish (or Texas)

Yesterday I saw on ESPNews that Kevin Garnett would not be playing in the All Star game next weekend. Bummer. And that he would be replaced by Rasheed Wallace. My first thought was that it was disappointing that the 1st Half MVP would not be able to partake in the festivities...

My second thought was that it is rather magnanimous of David Stern to choose Rasheed over, say, Ray Allen to replace KG in the game. I think Rasheed might be the only guy in the NBA who gets under the Commish's skin more than Mark Cuban. And Stern seems to be the kind of guy who just might hold a grudge. 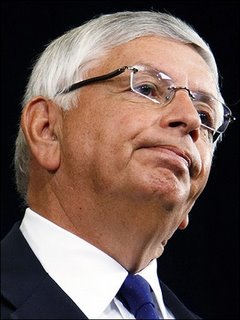 Turns out... this just might be one subtle way of Stern sticking it to Rasheed. Why?

Rasheed did not want to go to the game.

'Sheed had an exotic weekend vacation get-a-way all planned out. And now he's required to spend three days in New Orleans. Not exactly a relaxing island resort. Rasheed openly campaigned NOT to be selected as a reserve. No one listened. To quote from the Detroit News:

"When told he was hand-picked by commissioner David Stern to replace Garnett, Wallace gave a wry smile and said, 'It's a prestigious honor and a great pleasure.'" Something tells me what Rasheed really wanted to say included a few choice four letter words and maybe a guarantee (we all know how much he likes his guarantees).

Hey, 'Sheed, have fun getting dunked on by Yao next Sunday!