Musical chairs and the Western Conference

Share All sharing options for: Musical chairs and the Western Conference

The Fat Ass is now a member of the Phoenix Suns. (ha!)

Pau Gasol is now a member of the Los Angeles Lakers.

Chris Webber is now a member [and starter for!] the Golden State Warriors.

Kyle Korver... Utah Jazz (though the Rockets certainly weren't aware of this trade before the last time they played - how do you leave Ashton open???)

Jason Kidd -- openly lobbying for a trade. To anyone. Anywhere. 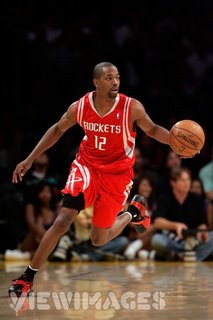 Nevertheless - what are the Rockets options now that seemingly every team in the Western Conference is loading up on players like there's a clearance sale at Merv's? Jonathan Feigen of the Chronicle thinks the Rockets are looking for continuity and improving from within. Essentially, the argument is that the Rockets do not need to make a headline-level trade. But ask the Chicago Bulls and about 3-4 other teams how that worked out... standing pat does not work in the salary cap era. Plus we have dead money on the cap that is going to waste and can be used in a positive way.

Trade Rafer? (please, please, please...) It's not going to happen though. At least not until June/July. Maybe he'll get arrested again in the meantime? Or maybe we can convince Steve Kerr to trade us Steve Nash for him (after the logic of the Shaq trade, anything is possible)?

There are other possibilities though. The Rockets still need help at point guard and at backup center. I'd prefer to not have to use Scola or Landry to guard the Duncans, Shaqs and Andrew Bynums of the world in the playoffs. The Rockets also have a ton of players taking up cap room that we don't exactly use right now.

Bob Sura's Expiring Contract - I love Bobby Sura. I even still have his Rockets jersey in my closet. But he is costing us $3.8M on the salary cap this year - and it's an expiring contract. They tend to be of value to teams looking to dump salary next year.

Steve Francis - Francis may be done for the season, which would ruin this idea. Just in case the report is wrong though, Francis is costing us $2.4M and he isn't exactly contributing anymore. Another expiring contract.

Jackie Butler - he's on the Rockets' books for $2.3M this season and $2.5M next season, too. What the hell?!?! Unlikely we can pawn him off until next year. The dude isn't even on the roster and he's costing us. Ugh.

The others? Bonzi Wells ($2.2M), Chuck Hayes ($1.7M), Dikembe ($1.2M) and John Lucas ($770k) all are in the last year of their contracts. Once again - expiring contracts are to NBA general managers what coke binges are to Amy Winehouse. F'n irresistable.

Bonzi is killing the Rockets right now. Not much hustle. No defense. Still can't make layups. And he's clogging the rotation. Chuck has been surpassed by Scola and Landry (rightly so). Dikembe is on the roster for comic relief at best. John Lucas is MIA. There has to be a way to put a package of these guys together to "sell" $8-10M of these expriring deals to a team looking to dump a player who may not be a fit for their team (hint, hint - JJ Redick! Kirk Hinrich! others!!). Standing still is not the answer.

The Rockets will make the playoffs. Of this I have no doubt. But the goal is to WIN in the playoffs. Not just be happy to get there. Come on Daryl Morey, do something!!