Share All sharing options for: On Notice - LeBron James??

Rockets v. Cavaliers tonight in Cleveland. 6pm CST
(that's really early guys - I'm still going to be at work. Can we change this? No??)

Oh, well - anyway, the Rockets are riding an 8 game winning streak and yet would not be in the playoffs if they started today. Fortunately for all of us, the playoffs DO NOT start today - so we can save all the mathematical "what ifs" until early April.

Moving along, over the past year or so, I've noticed something. LeBron James is starting to irritate the #@( out of me. His first two years in the league - he was great. I made time to watch him play whenever he was on TV. Now? Let's just say I'm putting him ON NOTICE: 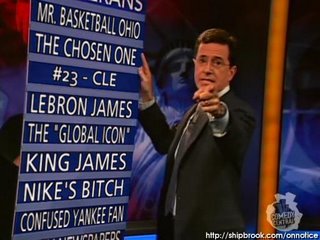 A few caveats before we begin:

1. I firmly believe that LeBron James is the second best player in the NBA, behind Kobe Bryant. (Yao Ming excluded from conversation for obvious bias issues I have.)

3. I have no doubt that LeBron will win at least one championship before he retires.

That said... LeBron, you are coming dangerously close to being categorized among the "Players I Despise" along with Karl Malone, Patrick Ewing, Emmitt Smith, Mike Piazza, Donovan McNabb and Hines Ward. Yes, I despise Hines Ward. That f--ker smiles all the time and yet his TD dances/celebrations consist of nothing but imitating someone else's signature dance. Get some originality, asshole.

Why is LeBron pushing the limits?

First, he's been handed the keys to the NBA without ever really doing anything. Yes, he's been to the NBA Finals. Where he lost. Say, Karl Malone can say the same thing - and we all consider him to be a huge choke artist still. Yes, LeBron is a two-time NBA All Star MVP. (Ray Allen should have won it Sunday, btw.) Yes, LeBron is always a threat to achieve a triple-double.

Nonetheless, I have one important question, Bron Bron - have you ever made any of your teammates better? The supposed knock against Kobe is that he never made anyone else play better alongside him. Yet it's pretty clear that his pushing and prodding have made Bynum, Farmar, Derek Fisher, Ronnie Turiaf and even Chris Mihm... play better than they ever have before. LeBron? Name one player who has improved because LeBron is his teammate?

Larry Hughes? All Star for the Wizards, unfortunate namesake of a blog dedicated to futility now.

Big Z? Was an All Star before LeBron. Now reduced to begging for shots and time on the court.

Donyell Marshall? Was a huge contributor for nearly a decade. (Do you realize he co-owns the record for most 3s made in a game... with Kobe?). With LeBron - Donyell is now reduced to forgetting to even put on a jersey before the game.

Drew Gooden? Hahahahahaha... I can't even finish the thought. LeBron didn't even have the decency to tell Gooden to cut that duck tail hair thing off last year. 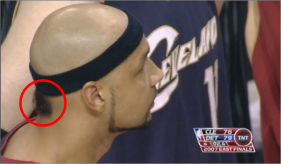 Hell, even Carlos Boozer may have been held back by LeBron. Boozer is a prick but he's a stud PF for Utah now. Hard to say he made the wrong choice in leaving the Chosen One behind.

Meanwhile, LeBron James has referred to himself as a "Global Icon" - or has at least expressed an interest in this being his true goal in life. Yet when a teammate asks him to take part in a campaign to stop the death and destruction in Darfur, LeBron claims ignorance and wants no part of it.

Hell, even Tracy McGrady is getting involved in the Darfur issue! 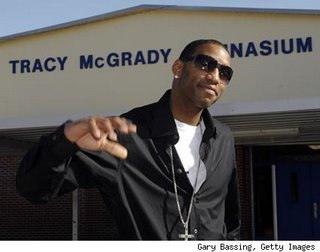 Look it up, LeBron, it's a good and necessary cause!

Then there is this. There is absolutely no explanation for this: 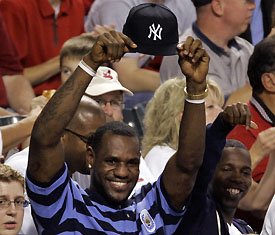