Speaking with the Enemy

Share All sharing options for: Speaking with the Enemy

Okay, so Tom is not exactly an "enemy" and he's actually a pretty cool guy - in addition to being the author, editor and creator of the best Indiana Pacers blog on these here interwebs, Indy Cornrows. Considering that the Rockets take on the Pacers tonight at 6pm CST in Indianapolis - we figured why not toss a few random questions at Tom and watch him sweat it out? Here's our Q&A... (our questions in italics)

[note, the first five questions are mine, Lee piled on with four more last night]

1. It's been nearly a year since the "whitewash" trade that brought Mike Dunleavy Jr. and Troy Murphy to Indiana, while shipping out Captain Jack and depleting possible salacious story lines for the media covering the Pacers. What's your take on the trade - was it good for the Pacers? Did it cripple your present and future? Are you genuinely happy that Stephen Jackson is finding success in Oakland?

The trade had definite pros and cons, but I really think the impact of the trade was over hyped. Stephen Jackson had worn out his welcome in Indy and he was frustrated playing in Rick Carlisle's controlling system. His nightly effort had deteriorated. I hated to see Al Harrington leave town, but for some reason he and Jermaine O'Neal never meshed on the court very well. They were great friends off the court, but their on court games just didn't compliment each other. On the other hand, Dunleavy has been incredible this season, Murphy has played well at times and not so well a lot of times. Ike Diogu was injured early in the year and has had problems since he returned. So, would the Pacers be much different today if the trade wasn't made? A little, assuming O'B was brought in. Offensively they wouldn't be any different, but defensively is where the difference would be felt. But, that's assuming Jack was happy and healthy. No one involved in the trade is worthy of a leading role on a team. Their success depends on supporting better players around them. I'm real happy Jack has found an environment to thrive in out with the Warriors. He thrives on the edge of chaos, so runnin' and gunnin' with Nellie Ball is a perfect fit for Jack.

2. Seriously, I thought Mike Dunleavy Jr. sucked. When did he become the Eli of the NBA?

Two things stick out in Dunleavy's improved play. For one, the system Jim O'Brien implemented is perfect for him. A glaring weakness in Dun's game is taking a defender off the dribble and finishing at the hoop. In Nellie Ball, if the ball doesn't go up on a shot or fast break layup, someone has to drive to the hole and finish or kick out for a shot (oversimplified, I know). So Dun was either had to launch up a shot that may be contested or try to take it to the rack. Yikes. O'B also employs a running game but when the ball is in the half-court the team runs a motion offense (at least they should). When Dun is scoring for the Pacers, there's plenty of ball and player movement. He moves extremely well without the ball, and seems to shoot much better when catching and shooting within the flow of the offense. Which brings me to Dun's second area of improvement -- shooting confidence. He came to town last year with an inconsistent stroke and I was advocating that he give up trying 3-balls. There seemed to be a yip in his follow through some nights. It wasn't pretty. This year he's been shooting with a ton of confidence and a consistent stroke. I think knowing where he's going to get his shots and being able to move into shots to develop some rhythm has helped that confidence.

3. What is the one thing the Pacers need to do to be competitive with Detroit and Boston in the East by the end of the 2009 season?

Honestly, they need to take a lead pipe to the knees of Rasheed, Billups, Tayshaun, KG, Pierce, and Ray Allen. If J.O. is healthy, that ought to even things up. If the Pacers skip the assault plan, they need to solidify their front court and point guard position, which will require a trade or two, excellent draft choices and a little luck.

4. Since we all believe Jermaine O'Neal will not be a Pacer by November of '08, what kind of package of players do you expect to get in return for him? And how much do Pacer fans regret the team not pulling the trigger on an O'Neal for Lamar Odom and spare parts trade with the Lakers this past summer?

J.O. is going to be awfully hard to move and I don't see him leaving $45 million on the table by opting out. I don't think he'll ever live up to that salary again, but I'd just be happy if he was healthy and productive again. The Pacers really miss his defensive presence. He believes he is heading into his prime years and is making sure his knee is healthy for those years, but it is hard not to think his best days are past. At this point, Kwame Brown and Javaris Crittenton or Jordan Farmar would be a great deal. The Pacers need to start over but until J.O.'s situation is resolved, it ain't happening.

5. Who guards Yao on Friday? And at what point in the third quarter can I expect that person to foul out?

I'm sure Jeff Foster will probably start out on Yao. He may foul out, but I can almost guarantee that David Harrison will probably have to play Yao at some point and he will most certainly foul out. 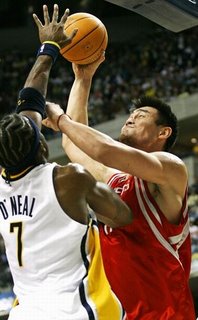 6. If O'Neal could have come out like Kobe did and put the past behind him and just played, in your opinion would it have made a difference? I'm under the impression that it would have, but it's possible that you just have too many front court players for it to have mattered.

I think J.O.'s attitude was fine heading into the season. The problem was he just wasn't healthy. He and the team wanted to believe his knee was 100% but it wasn't. He's maybe played five games this year where he had a bounce in his step and some lift in his jump. It is not hard to tell when J.O. is playing hurt and as valiant as that might sound, his production is awful when he's not at full strength.

7. Living in Indiana how big of a following do the Pacers have? (ed. note - my parents are actually from Indiana. And you wonder why I am such a basketball junkie? - David) It's obviously basketball country, but sometimes things don't translate to the pro game. In the mid 90s I got to go see a Pacers/Knicks game at Indiana and was impressed, but how much of that was the team playing well and how much was it blind obsession? Do the Pacers still have the hearts of the state even with the Colts being a great team? Are they equally loved?

Make no mistake, this is a basketball state but the Pacers have turned off a lot of fans with all of the off-court problems. You juxapose those problems with the Colts squeaky clean image and the Pacers appear in complete disarray. In reality, the Colts have had more off-field problems over the past few years, but never with the high profile players. Plus, the offending players for the Colts usually end up off the roster before long. When you only have 12 players suiting up they're all high profile and salary rules make it real hard to move troubled players in the NBA. There are plenty of Pacer fans that will return when they feel the team is worth rooting for and/or starts winning. Right now IU, Purdue and Butler offer great alternatives for the hoop fans around here, so there is a lot of competition in this small NBA market. They've always had that competition. In fact, in 1977, the year after the Pacers went from the ABA to the NBA, then coach, Slick Leonard, and his wife hosted a "Save the Pacers" telethon to drum up enough ticket sales to keep the team in Indy.

8. Who is your favorite non-Reggie Miller Pacer of all time and why?

I could go a few directions here, but I'd have to say Mark Jackson. He played the game with style and gave the Pacers a swagger that impacted 1-12 on the roster. Plus, in running the show he set up Reggie for plenty of big shots.

9. I firmly believe Reggie is a Hall of Famer. And considering that he is Dave's favorite NBA player of all time (ed. note - yes, this is all true) not named Robert Horry, he agrees (Dave owns a Reggie Miller jersey, I think it's the only non-Houston or SMU based jersey he has). If you were giving a speech for his nomination, what would be the first story of his game that came to mind?

Closer. Reggie was a closer for the best Pacer teams. We've all lost track of the number of times everyone knew he would shoot the game deciding shot, we all moved to the edge of our seats, he freed himself for an open shot through sheer will, now we're standing, he received a pass, rose to launch a jumper as everone raised their arms, release, odd rotation, splash. Delirium! Take a bow. Enjoy the goose bumps, Dave. 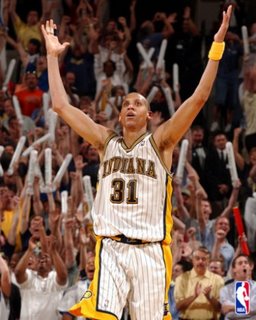 We would like to thank Tom for taking the time out to answer our completely random and off-the-wall questions. We'd also like to thank his Pacers in advance to letting the Rockets get to 26-20 tonight! Go Rockets!