Share All sharing options for: This one goes to 11! 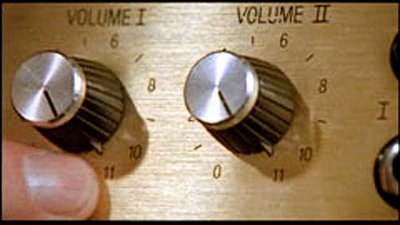 Dave got on me for not using that earlier, but I didn't want to jinx the guys. Now? Fudge it! Eleven wins in a row, and the greatest win of the entire season!! 100-80 and a completely dominating performance, the game really wasn't that close. I have to say, I'm a little surprised, not that they won, but that they won like that. CP3 was shut down. Scola and Landry were everywhere and completely in David West's head (not saying he didn't play well, but he got distracted at times). Yao dominated Chandler every second they were on the floor together as the Hornets inexplicably guarded him 1 on 1. That's just stupid, no team in the league can do that, a team with an undersized "center" is just stupid to try it.

Tracy McGrady from 3 years ago, welcome back, and thanks for finally showing up. Only Kobe can guard this Tracy, that's it, no one else in the league can do it. 34 points on 14-26 shooting with 6 assists and 3 rebounds and only 2 TOs. Great game Tracy, he drove the lane extremely well, ran the fast break and had exceptional elevation on his jumper. All that on back to back nights, simply fantastic to have you back man.

Yao was his normal dominant bad ass self, scoring 28 on 12-21 shooting with 14 rebounds (5 offensive), 2 assists and a block. And he also only turned it over 2 times. And they weren't calling crap tonight, Yao could have about half of those misses back if the refs had been calling it tighter. Not that it bothered me, just saying that a lot of contact was let go. That style of refereeing helps the Rockets overall if called both ways and it was, and consistency is all you can ask for.

Luis Landry combined for 15 points, 20 rebounds and a steal, I love this PF combination! The energy was there, the dunks and layups were there, the good hands and solid defense were there as well. David West had a really good game with 20 and 10, but Luis Landry was in his head at times, causing him to get a technical and bitch a lot at the refs. It was everything we need from these guys come playoff time.

In the first quarter this game was like a playoff game, and the Rockets responded and there was nothing New Orleans could do about it. We cut off the passing lanes with solid defense. It's really impressive that they only had 9 turnovers. All of that can be attributed to the fact that CP3 is a golden god with the ball and just doesn't make bad passes. Of course while there weren't turnovers there were a lot of bad shots at the end of the clock. The defense was suffocating pretty much from beginning to end.

Great game gentlemen! Next up, the Chicago Bulls on Sunday at 7PM CST on ESPN. I'll be cooking for the Houston Rodeo BBQ cook off, so I can't go and will probably be watching it on tape delay.

And to the Bulls, thanks for taking out Denver tonight, great job guys! 7 guys in double figures, impressive! Don't expect to put up 135 on the Rockets though. I'm betting BlogABull is riding high right now.