Share All sharing options for: Tonight's scrimmage vs. Minnesota

Wait -- what? You're telling me it's a real game tonight? No way. When did the NBA start a cross-promotion of having its teams start playing real games against NBDL teams? What's that? Minnesota has not been relegated to the NBDL? Coulda fooled me!

Last time the Rockets faced the T-Wolves (also known as the Grand Entrance of Carl Landry to the NBA) we won by 31 points. And we played awful. I should know. I was there in person witnessing the event. The Rockets didn't even have - or need - the services of one Tracy McGrady. And the scrubs received by the Wolves when they traded KG offered no resistance. Scola and Bonzi and Yao abused Minny. We could have won by 50. 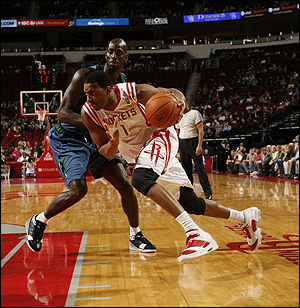 (neither of these guys were in the last game. McGrady probably plays tonight, but, as usual, it's unlikely we'll see him actually driving it to the basket.) Carl Landry had 15 points and 11 rebounds the last time in his first game that wasn't merely a cameo appearance. He hasn't had a DNP-CD since. It only took two months for Ricky to wake-up, I guess.

I don't see much different this time around. The Wolves still suck [ed. note -- badly!], and the Rockets are once again playing well and winning games. This could be the lineup in the 4th Q:

translation: we probably won't need Yao after the first 36 minutes. And now that I've properly jinxed the team - Go Rockets!